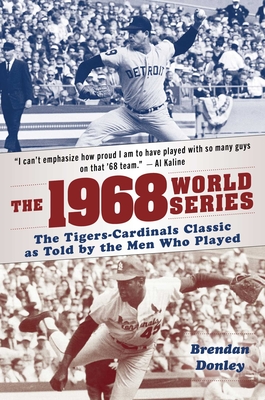 The Tigers-Cardinals Classic as Told by the Men Who Played

The 1968 World Series recalls one of baseball's most celebrated championship series from the voices of the players who still remain--a collected narrative from a bygone era of major-league baseball as they reflect fifty years later.

Modeled after Lawrence S. Ritter's celebrated book, The Glory of Their Times--for which the author traversed the country to record stories of baseball's deadball era--The 1968 World Series will likewise preserve the days of baseball past, gathering the memories of the remaining players of the great Tigers and Cardinals teams to assemble their accounts into a vibrant baseball collection.

The 1968 World Series came at a time of great cultural change--the fading days of fans dressing up for ballgames, the first years of widespread color TV--and was an historic matchup of two legendary teams, pitting star power head-to-head and going the distance of seven hard-fought games.

Brendan Donley is a writer from Oak Park, Illinois. A graduate of Columbia University, his work has been featured in the New York Times, Byliner, Hobart, and Pithead Chapel, along with the rest of his work housed at The Big Inning, an original website for daily baseball columns.

Praise For The 1968 World Series: The Tigers-Cardinals Classic as Told by the Men Who Played…

"I wish I had been alive to have seen the 1968 World Series, one of the most memorable and historic World Series of all time. This book makes me feel like I was. The sport hasn't been the same since."
—Will Leitch, author of Are We Winning and God Save the Fan, contributing editor, New York Magazine, national correspondent, MLB.com, and founder of Deadspin

"This is an oral history of the ’68 Tigers and it’s lovely testimony from all the principals involved. No matter how much you remember from 1968 and Detroit’s mystical march to winning the World Series, no matter how many stories you’ve personally listened to and written about, the compendium of memories amassed here is rich history and a chance to revisit the sheer ecstasy Detroit and Michigan experienced during a year of baseball unmatched for the drama it regularly delivered. This was diligent and impressive work by Donley. Anyone remotely familiar with 1968’s grandeur will appreciate this project, fully."
—Lynn Henning, Detroit News

“This is such a treasure of all the memories gathered from these players, and it’s a great way to relive this Series. For readers who are familiar with these stories, you will hear a new angle on them, and for others who are not as familiar with the ‘68 Series and want to know what made it so memorable, this is the ideal way to get exposed to it.”
—Nathan Bierma, host of the Tigers History Podcast
or
Pre-Order Now
Copyright © 2020 American Booksellers Association