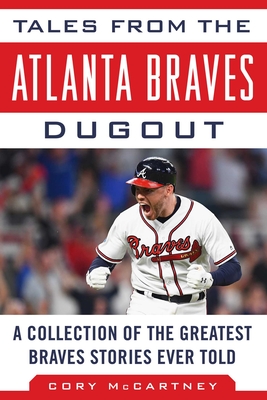 Tales from the Atlanta Braves Dugout

Recall the harrowing experience of Atlanta–Fulton County Stadium catching fire on July 21, 1993, overshadowing the debut of Fred McGriff, and read all about Sid Bream's slide and the worst-to-first season of 1991. From the run of 14 consecutive division titles and the 1995 World Series title, to Kent Mercker's 1994 no-hitter; from the arrival of the Baby Braves in Brian McCann, Jeff Francoeur, and others, to the 2014 Hall of Fame induction of Tom Glavine, Greg Maddux, and Bobby Cox, the on and off the field stories are all here.

This is the perfect addition to a Braves fan’s shelf!

Cory McCartney is an Atlanta-based writer, member of the Baseball Writers Association of America and the Football Writers Association of America and is a Heisman Trophy voter. Previously with FOX Sports South and Sports Illustrated, he hosted the Braves podcast Chopcast and the Chopcast LIVE television show and served as an analyst for the Big Ten Network. His work has also appeared on CNN.com.
Loading...
or support indie stores by buying on
(This book is on backorder)