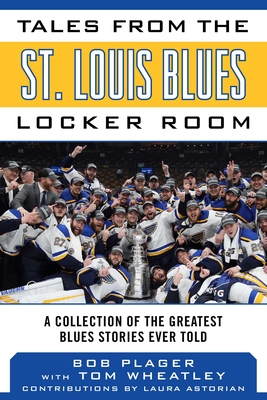 Revised and updated to feature the 2019 Stanley Cup victory!

Nobody bleeds Blue like Bob Plager, considered one of the funniest men in hockey. This rollicking book details Plager’s romance with the Bluenotes from day one in 1967 to the present day. He was an original Blues player, a rugged defenseman whose specialty was the hip check. He remains an original personality and a good-humored man whose specialty is now the quick quip. As a master storyteller, Plager packs Tales from the St. Louis Blues Locker Room with insights from every level of the hockey rink. He chronicles the puzzling mind games of a young Scotty Bowman, the quirky coach whose legend began with the original Blues. In those old-school days, Plager learned memorable lessons from veterans like Al Arbour, Doug Harvey, Glenn Hall, Dickie Moore, and Jacques Plante, all future Hall of Famers.

The tears and the cheers, the fun and the frustration—it is all found in Tales from the St. Louis Blues Locker Room.

Bob Plager both played and coached in the Blues organization. He ranks fifth all-time in Blues history with 615 games played. Currently, Plager works in the Blues’ community relations department and also is an analyst on KMOX. He lives in St. Louis, Missouri.

Tom Wheatley, a former sports columnist for the St. Louis Post-Dispatch, is a four-time Missouri Sports Writer of the Year. He is the author of St. Louis Sports Folks and the coauthor of The Memoirs of Bing Devine, 70! Mark McGwire, Fathers and Sons, Get With It, Girls! Life is Competition, and Bob Forsch's Tales from the Cardinals Dugout. He lives in St. Louis, Missouri.

A Blues fan since childhood, Laura Astorian has had to follow the team from afar. After moving to Atlanta in 1992, Laura got by on newspaper clippings, a large hockey card collection that, according to her mother, "would never be worth anything" (it is), and her copy of NHL 94. Laura currently is the editor of the SB Nation blog St. Louis Game Time, the internet home of the fan-run paper of the same name that has been sold outside of Blues home games for more than twenty-five years. Laura lives and works in suburban Atlanta.
Loading...
or
Not Currently Available for Direct Purchase