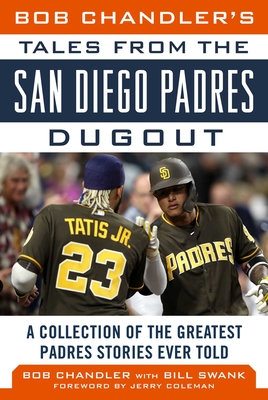 Since they burst onto the scene in 1969, the San Diego Padres have taken fans on a roller-coaster ride of ups, downs, and unforgettable moments. In this newly revised edition of Bob Chandler's Tales from the San Diego Padres Dugout, longtime Padres announcer Bob Chandler shares his memories of the team with Bill Swank in an easy-to-read recap of the team’s colorful past.

Chandler and Swank utilize their numerous contacts to bring readers many inside stories and humorous anecdotes dating back to the team's birth on May 27, 1968. Readers will hear from Padres favorites, such as Tony Gwynn, Steve Garvey, Trevor Hoffman, newly signed Manny Machado, and many others as they provide insight and a behind-the-scenes perspective on this beloved franchise.

Newly updated to include the 2019 season, this book is a must-have for any Padres fan.

Bob Chandler is San Diego’s senior sportscaster. Bob began working in the San Diego television-radio market in 1961, covering the San Diego sports scene full time in 1963. In 1972, Chandler joined Jerry Coleman s the television-radio broadcasters for the San Diego Padres. Associated with the Padres from 1970–2003, Bob Chandler likely knows more than anyone when it comes to Padres baseball. During his career, in addition to the Padres, Chandler has done play-by-play for numerous other sports in San Diego. Bob has worked for five different television stations in the city, delivering regular evening sportscasts, interviews, and play-by-play broadcasts. Chandler is a 1961 graduate of San Diego State and lives in the Tierrasanta area. He has four daughters and six grandchildren.

Bill Swank is San Diego’s preeminent baseball historian. He has authored or co-authored ten previous books, including his award-winning Echoes from Lane Field. He also played second base for the original House of David baseball team as Santa Claus. Swank graduated from San Diego State in 1962 and is a retired probations officer. He still resides in San Diego.
or support indie stores by buying on
Copyright © 2020 American Booksellers Association