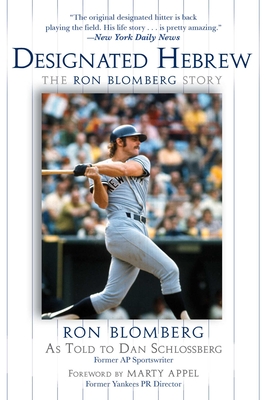 The Autobiography of the First Designated Hitter to Play in the MLB—​Now in Paperback!

On April 6, 1973, Ron Blomberg took a swing at home plate that changed baseball history. Through a quirk of fate the young Jewish Yankee became the first designated hitter to play an MLB game. At the time, George Steinbrenner had just taken control of the Bronx Bombers, the National League was still refusing to adopt the DH rule, and New Yorkers were pinning their hopes on a new generation of players. In this heart-warming autobiography, now in paperback, Blomberg relives the moment that made his career and the countless experiences before and after that helped boost him to legendary heights.

In Designated Hebrew, Blomberg recounts a time when baseball and America itself were changing. Before Blomberg arrived in New York, the Yankees only employed three Jews in the entire organization. Though his career goals were eventually thwarted by injury, Blomberg still represented hope and pride to millions of Americans across the country. This unforgettable story is the journey of one man as he learns to balance life, religion, and ultimately, baseball.

Marty Appel is a former New York Yankees Public Relations Director and Emmy award-winning television producer. He is also the author of 24 books, including Casey Stengel: Baseball’s Great Character; Pinstripe Empire: The New York Yankees from Before the Babe to After the Boss; and Munson: The Life and Death of a Yankee Captain. Appel has collaborated on projects with Commissioner Bowie Kuhn, with Tom Seaver, with TV personality Larry King, and written a memoir, Now Pitching for the Yankees. He is the magazine historian for the Baseball Hall of Fame’s publication, “Memories and Dreams,” and is a leading historian on the New York Yankees.
Loading...
or
Not Currently Available for Direct Purchase