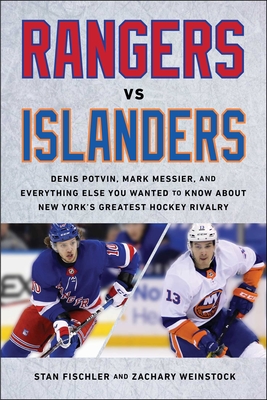 Denis Potvin, Mark Messier, and Everything Else You Wanted to Know about New York's Greatest Hockey Rivalry

The intrastate rivalry between the Islanders and the Rangers is like no other in the NHL. Playing in the same league and with home rinks mere miles from one another, these two teams face off against each other multiple times a season. With devoted fans on either side backing their personal hometown favorites, the cross-town series between the two is often just as heated as championship games.

In this newly updated version of Rangers vs. Islanders, Fischler and Weinstock expertly narrate the entirety of the on-ice feud between the Islanders and Rangers. All of the major events are covered in-depth: from the Islanders’ founding in 1971; to the first meet-up in 1972; to the infamous 1975 playoff series; to all eight playoff meetings during the ’70s and ’80s; to the notorious Game Five of the 1984 playoffs; to the pair’s first-ever shootout in 2005; to the Islanders’ controversial move to Brooklyn in 2014; and every other major event in between.

In addition to the heated on-ice action, Fischler and Weinstock also include all of the greatest off-ice moments in the legendary rivalry. With chapters on the impact of fans and interviews with players, coaches, and managers, Rangers vs. Islanders is a must-have for every true hockey fan, whether they root for the Islanders or the Rangers.

Stan Fischler is a legend of sports broadcasting. He began his career as a publicist for the New York Rangers in 1954 and has been covering hockey in the over half a century since. The winner of five Emmy Awards, Fischler has worked in every medium from print to TV to Twitter. This “Hockey Maven” currently serves as the resident hockey expert for MSG and MSG Plus. He can be seen every week on MSG Hockey Night Live. He lives in New York City.

Zachary Weinstock is the co-author of the Handy Hockey Answer Book. He served as a production assistant for Islanders telecasts on MSG Network from 2008-2014 and was a consultant on Big Shot, a 2013 ESPN documentary. He has contributed to The Fischler Report and to Bleacher Report. Weinstock is also a a part-time Associate Attorney at Pianko Law Group, PLLC. He lives in Queens, New York.
Loading...
or
Not Currently Available for Direct Purchase