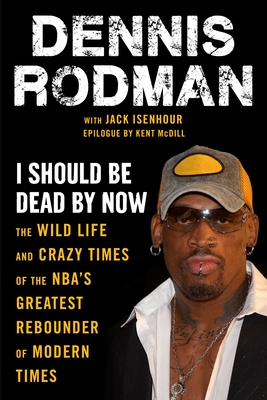 I Should Be Dead By Now

Whether it was helping Michael Jordan and the Chicago Bulls win three consecutive NBA titles in the 1990s, or showing up to a book signing in a dress and full makeup, Dennis Rodman has always distinguished himself as one of the great and most polarizing personalities in the sports world. The controversial and flamboyant former basketball star is back in the national spotlight once again with I Should Be Dead By Now. This riveting book from the two-time best-selling author details Rodman’s struggles in life since he stopped playing in the NBA, including the breakup of his marriage to movie and TV star Carmen Electra, and his problems with alcohol. I Should Be Dead By Now is a look at the life of one of America’s most recognizable sports stars as he journeys beyond the court and into the Naismith Basketball Hall of Fame.

Dennis Rodman is a seven-time NBA rebounding champion. During his career with the NBA he earned 5 Championship rings, and was named Defensive Player of the Year in 1990 and 1991. In 2011, Rodman was inducted into the Naismith Basketball Hall of Fame. He splits his time between Huntington Beach, California, and West Orange, New Jersey.

Jack Isenhour is an award-winning television journalist, writer, and decorated veteran. While enrolled at West Point, Isenhour played on Bob Knight’s first college basketball team. After being honorably discharged from the Army with the rank of Captain, Isenhour began his career in communications and was the cocreator and executive producer of PBS’s nationally syndicated talk show Freedom Speaks. He lives in Charlotte, North Carolina.
Loading...
or support indie stores by buying on