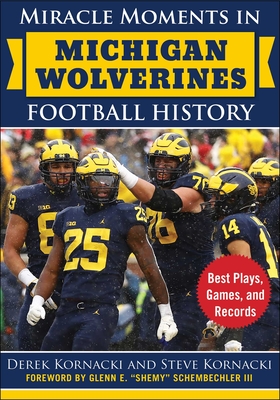 Newly updated!
With the most victories in college football history, the University of Michigan Wolverines have a long and storied history. They have won forty-three Big Ten championships, eleven national titles, and twenty-one bowl games. These accomplishments and more are celebrated in Miracle Moments in Michigan Wolverines Football History. Derek and Steve Kornacki detail many of the Wolverines' greatest moments including legendary coach Fielding Yost's 1901 "point a minute" team that posted a perfect 11–0 record and outscored their opponents, 550–0; the opening of Michigan Stadium, "The Big House" in 1927; the hard-fought "Snow Bowl" victory over Ohio State in 1950; the 1969 victory over Ohio State that broke the Buckeyes' twenty-two-game winning streak and launched "The Ten-Year War;" the 1998 Rose Bowl victory over Washington State that clinched their first National Championship since 1948; and much more. All the great players (including Heisman Trophy winners Tom Harmon, Desmond Howard, and Charles Woodson) and coaches are highlighted in Miracle Moments in Michigan Football History, a must-have for all fans of the maize and blue.

Derek Kornacki covered coach Jim Harbaugh’s Wolverines as a blogger, and has been published in the Tampa Tribune and other publications as a freelance writer. He studied screenwriting at Columbia College in Chicago and resides in Plymouth, Michigan.

Steve Kornacki has covered the University of Michigan Wolverines for five decades for the Ann Arbor News, Detroit Free Press, and most recently for MGoBlue.com, the university’s official athletics website.

Glenn Edward "Shemy" Schembechler III has been a scout for the Washington Redskins, Kansas City Chiefs, Seattle Seahawks, and Chicago Bears. He also was the assistant recruiting coordinator at the University of Michigan. He has worked with renowned coaches such as Joe Gibbs, Marty Schottenheimer, Gary Moeller, Lloyd Carr, and his father, Michigan Hall of Fame coach Bo Schembechler. Shemy now heads GES Advisory Company, which scouts and works to place high school football recruits with schools from NAIA to Division I. He lives in Columbus, Ohio, with his wife, Megan, and their son, Glenn Edward "Bo" Schembechler IV.
Loading...
or support indie stores by buying on