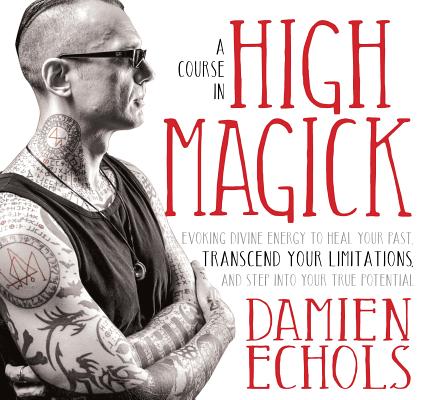 A Course in High Magick

Evoking Divine Energy to Heal Your Past, Transcend Your Limitations, and Step Into Your True Potential

Unlock Your Power as a Co-Creator of Reality
"High Magick is the ability to shape the world around us with our will," teaches Damien Echols. "Whether you know it or not, you’re already doing magick with every thought, word, and deed. The only difference between a magician and the average person is that a magician does it intentionally."

Damien credits the practice of magick for helping him survive his wrongful imprisonment on death row—and allowing him to create the circumstances that led to his freedom. With A Course in High Magick, he shares the essential elements of this powerful practice for expanding consciousness and unlocking your hidden potential.

Direct Training for Working with the Energies of Creation
"Magick starts with mastering the basics, then finding which techniques and variations work best for you," teaches Damien. "That doesn’t happen overnight—but those who stick with it find treasure beyond imagining."

Created as a practice-based audio companion for Damien’s book High Magick, this course guides you with precision and clarity through each step of the essential techniques for accessing your power to reshape your reality. Starting with simple breathing meditations, Damien helps you build your "magickal muscles" with spiritual practices that have been empowering mystics and magicians for centuries.

"With consistent practice, magick becomes second nature," says Damien. "You’ll be doing a refined version of what you’ve done every day of your life—only more deliberately, and with a lot more power." For anyone committed to personal transformation and service to a greater purpose, here is an invitation to step into your power and begin manifesting the world you want to see.

DAMIEN ECHOLS was born in 1974 and grew up in Mississippi, Tennessee, Maryland, Oregon, Texas, Louisiana, and Arkansas. When he was 18, Damien and two other young men were wrongfully convicted of murder, eventually becoming known as the West Memphis Three. Having received a death sentence, Damien spent almost two decades on death row, until he was released in 2011. While in prison, Damien was ordained into the Rinzai Zen Buddhist tradition. He is the subject of Paradise Lost, a three-part documentary series produced by HBO, and West of Memphis, a documentary produced by Peter Jackson and Fran Walsh. Damien is also the author of the New York Times bestseller Life After Death and Yours For Eternity (with his wife Lorri Davis).

Damien teaches classes on magick around the country and works as a visual artist. His artwork entails glyphs, sigils, and symbols designed to bypass the conscious mind and speak directly to the subconscious, combining magick techniques with his own alphabet and writing system to break down concepts and scenarios into abstract designs. He and Lorri live in New York City with their three cats.