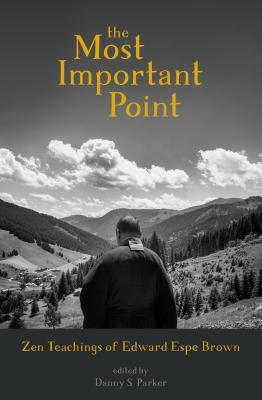 The Most Important Point

From master baker, cook, and Zen priest Edward Espe Brown comes a collection of timeless essays on Zen, food, and life itself. Brown was one of the first Westerners to be ordained a priest by Shunryu Suzuki Roshi, who had hoped that Zen might be transformed into a vibrant new form in the West. In The Most Important Point, Brown fulfills Suzuki’s wish with 60 essays that are distinctly American yet preserve the roots of traditional Japanese Zen.
Drawing from his time in the kitchen and on the cushion, Brown explores a range of topics, from basic sitting practice to making the "perfect" biscuit and much more. "In the words of my teacher," reflects Brown, "the most important point is to find out what is the most important point." Flavored with wise insights and irreverent humor, The Most Important Point brings together a treasury of teachings to inspire your own discovery.


Praise For The Most Important Point: Zen Teachings of Edward Espe Brown…

“[An] affecting collection...The diversity of topics and brevity of each piece make this a good resource for daily meditations. Practicing Buddhists as well as general readers looking for suggestions for leading a more mindful life will find plenty of inspiration here.” —Publishers Weekly

“These talks really capture the modesty and down-to-earth reality of Dogen and Suzuki Roshi’s, and now Ed Brown’s, Zen. I was deeply touched by them. One recipe after another for true practice, if you are ready to cook and be cooked. Enjoy!” —Jon Kabat-Zinn, founder of MBSR and author of Falling Awake

“This is a book that will nourish all aspects of one's life. Smart, sharp, deep, like a good meal, the wisdom that Ed Espe Brown offers us is a treasure for all time. And it makes Zen digestible, even delicious!” —Roshi Joan Halifax, abbot of Upaya Zen Center and author of Standing at the Edge

“Ed and Danny, two master chefs, have prepared a simple and elegant literary feast—with Tassajara magic for its background flavor. Humor and well-chosen poems add juice to dish after dish. The Most Important Point does not shy away from relating raw personal experiences with warmth and compassion. I have no doubt that many readers will find this book, as I have found it page after page, irresistible.” —Brother David Steindl-Rast, Benedictine monk, author of Gratefulness, the Heart of Prayer: An Approach to Life in Fullness and May Cause Happiness: A Gratitude Journal, and cofounder of gratefulness.org

“Like the best teaching in any spiritual tradition, The Most Important Point speaks to you just where you are. If you’re new to Zen, this book is for you. If you’ve been practicing a long time, this book is also for you. It is filled with the wisdom of a lifetime.” —Ruth Ozeki, author of A Tale for the Time Being and The Face

“No matter what you think you know about Zen, Ed Brown may know more. He certainly prepares his wisdom like a meal: pungent, saturated with taste, leaving very little to discard. He makes it look easy. I couldn’t put this book down. It made me feel like a beginner all over again . . . after 45 years.” —Hosho Peter Coyote, author and Zen priest

Edward Espe Brown began cooking and practicing Zen in 1965. He was the first head resident cook at Tassajara Zen Mountain Center from 1967 to 1970. He later worked at the celebrated Greens Restaurant in San Francisco, serving as busboy, waiter, floor manager, wine buyer, cashier, host, and manager. Ordained a priest by Shunryu Suzuki Roshi, he has taught meditation retreats and vegetarian cooking classes throughout North America and Europe. He is the author of several bestselling cookbooks, including The Tassajara Bread Book, and the editor of Not Always So, a book of lectures by Shunryu Suzuki Roshi. He is the subject of the critically acclaimed 2007 documentary film How to Cook Your Life. He resides in Fairfax, California.
Loading...
or
Not Currently Available for Direct Purchase