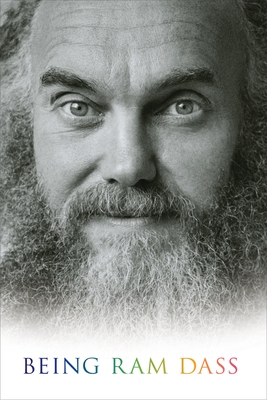 “Ram Dass lived a full life and then some. His final statement is thorough and, yes, enlightening.” —Kirkus Reviews

Perhaps no other teacher has sparked the fires of as many spiritual seekers in the West as Ram Dass. If you’ve ever embraced the phrase “be here now,” practiced meditation or yoga, tried psychedelics, or supported anyone in a hospice, prison, or homeless center—then the story of Ram Dass is also part of your story.

From his birth in 1931 to his luminous later years, Ram Dass saw his life as just one incarnation of many. This memoir puts us in the passenger seat with the one-time Harvard psychologist and lifelong risk-taker Richard Alpert, who loved to take friends on wild rides on his Harley and test nearly every boundary—inner or outer—that came his way.

Being Ram Dass shares his life’s odyssey in intimate detail: how he struggled with issues of self-identity and sexuality in his youth, pioneered psychedelic research, and opened the doorways to Eastern spiritual practices. In 1967 he trekked to India and met his guru, Neem Karoli Baba. He returned with a perspective on spirituality and psychology that changed millions.

Featuring 64 pages of color photographs, this intimate memoir chronicles the cultural and spiritual transformations Ram Dass experienced that resonate with us to this day, a journey from the mind to the heart, from the ego to the soul.

Before, after, and along these waypoints, readers will encounter many other adventures and revelations—each ringing with the potential to awaken the universal, loving divine that links us to this beloved teacher and all of us to each other.


Praise For Being Ram Dass…

"A comprehensive memoir from a famous but humble spiritual seeker." —Kirkus Reviews

"Throughout the book [BEING RAM DASS], he [Ram Dass] is cogent, warm, and wise; the book provides a glimpse into an extraordinary life as well as a historical moment, one that continues to resonate." —The Boston Globe

“Being Ram Dass is a profound journey into the heart and soul of one of the world’s most beloved spiritual leaders. Throughout, we are reminded that our intrinsically loving nature can never be tainted or destroyed.” —Tara Brach, PhD, author of Radical Acceptance and Radical Compassion

“Ram Dass is one of the great spiritual masters of our time, who was at the same time extremely humble, approachable, and a quintessential storyteller! His stories were all inspiring, uplifting, and transforming. He also knew how to transcend all stories and find the highest truth in the pure knowing and love of just being. This book will be a joyful companion to anyone on the spiritual journey.” —Deepak Chopra, MD, author of Total Meditation

“Being Ram Dass is a wonderful memoir, sharing his life’s travels and journey from Harvard to Bodh Gaya to Kainchi, and all over the world. Ram Dass became a beloved spiritual guide to so many, and this book is a reminder of all the ways he impacted our lives. Love, Serve, Remember . . .” —Sharon Salzberg, author of Lovingkindness and Real Change

“When Ram Dass left this world, he was eulogized as a ‘new age guru.’ He was so much more than that, as all know who were delighted, stretched, and transformed by his presence, his teaching, and his writing. His imprint was growing on a new generation at the end of his life, and will continue to do so. For this was a singular, radiant human being who never stopped deepening and evolving. As wise and fluent in the language of intellect as of spirit, of ‘fierce grace’ as of karma, Ram Dass embodied the possibilities of consciousness, and of spiritual evolution, as few have. He is missed, and yet he is still with us. No surprise that we receive this book, his story, just when we need it most.” —Krista Tippett, founder and CEO, The On Being Project; host, On Being; curator, The Civil Conversations Project

“Ram Dass is no more. But he has left us a magnificent gift. Honest, touching, tender, and inspiring, his autobiography takes us on the journey of the making of an American saint. And what a journey it was! If you thought you knew Ram Dass, think again. And if you did not know him, get ready. This book will light up your soul.” —Mark Epstein, MD, author of Thoughts Without a Thinker and The Trauma of Everyday Life

“This is an extraordinary autobiography, one that totally draws you into the mind and heart of beloved teacher Ram Dass. The detail he shares about his life is like nothing we have read before. Truly astounding. A page-turner, this book is a great treasure house of wisdom, joy, and wonder.” —Roshi Joan Halifax, abbot, Upaya Zen Center

“With his playful wit, luminous mind, and generous heart, Ram Dass lured generations of seekers into the life of the Soul. I am one of those lucky pilgrims. I met Ram Dass in the 1970s, when I was a teenager on fire with desire for God. Ram Dass pointed toward an array of sacred gates—Hinduism, Buddhism, Sufism, Christian mysticism, mystical Judaism—and beyond the traditions to what our Guru, Neem Karoli Baba, meant when he would say, ‘Sub ek’ (All is One). This confluence of spiritual sources has permeated my life, giving rise to everything I do and am. This book, transmitted by Ram Dass in the final years of his life and beautifully transcribed by Rameshwar Das, is not only a thoroughly riveting read but also a portal to that boundless wellspring of love.” —Mirabai Starr, author of Caravan of No Despair and Wild Mercy

“This book beautifully chronicles the transformation of a man into pure love. Ram Dass may have been the greatest spiritual voice of a generation. Certainly he was its most loving heart.” —Frank Ostaseski, author, The Five Invitations: Discovering What Death Can Teach Us about Living Fully

“Being Ram Dass is a glorious book about the transformation of a man born into wealth and privilege who through the study of psychology, psychedelics, and then meditation becomes one of the central voices of his generation and discovers the true gold of spirituality, love, and service. Ram Dass’s autobiography is an exploration of this transformation filled with profound insights and fascinating stories. Being Ram Dass is for those interested in and/or stewarding the current psychedelic renaissance—including those in the burgeoning world of for-profit psychedelic companies—for those interested in spirituality and service, and for everyone who simply wants to read about a unique and inspirational incarnation.” —Rick Doblin, PhD, executive director of MAPS

“I’m so grateful that Being Ram Dass has finally come out. I’ve been through Polishing the Mirror three times now and am so eager for more stories of wisdom and insight from this precious teacher.” —Laurie Anderson

“A long love letter and lasting testament from America’s Guru, sharing his altered statesmanship, his ruthless honesty, his ecstatic devotion to Maharaji, his commitment to love and being present, his quest for healing humanity body and soul, his journey of aging, including the hard parts. This is what we adore about our perfectly imperfect master, leader of the Love Tribe. Now we get to absorb his final gems of wisdom shared in this life-summation, Being Ram Dass.” —Alex Grey & Allyson Grey

“What an utter delight and heart-bursting pleasure to immerse myself in Ram Dass’s autobiography, Being Ram Dass. To be able to feel so much intimacy and connection with him this year is like a healing balm for the uniquely challenging times.” —Jamie Catto, director of Becoming Nobody film

“Ram Dass’s deep yearning for Truth shines through every stage of his life in this inspiring and transformational memoir. His story makes you ask yourself, ‘What is the most important thing in my life and how committed to that am I, really?’ Ruthless self-investigation combined with boundless love for God and all beings is his answer.” —Dale Borglum (Ram Dev), director, Living/Dying Project

“Being Ram Dass is the profound story of one of the most inspiring souls of our times—a being who held the torch for all to follow. Lighting the way by acknowledging his own egoic journey, he moved beyond to embrace the divine and sacred in every moment. His humor and intellect inspired, while his actions have uplifted and continue to help so many. His deep love for everyone is his lasting legacy.” —Stephan Rechtschaffen, MD, founder of Blue Spirit Costa Rica and Omega Institute

“The stories behind the stories of the best storyteller of our generation. With little veneer or evasion, Ram Dass peels back the layers of his many lives. We leave his presence enriched, and thankful.” —Arthur Magida, author of Code Name Madeleine: A Sufi Spy in Nazi-Occupied Paris

“Being Ram Dass brings me once again to the feet of my teacher. His wit and wisdom shine through in this intimate glimpse into the life of the man who shone so bright as he lit our own hearts on fire. The depth of my devotion and self-acceptance I owe to his teachings; reading this book makes me feel like he is still right here with me, holding my heart with unwavering compassion.” —East Forest, music artist and creator of the Ram Dass album

“Ram Dass’s human experience has always been so much part of his teaching. This narrative is a gift of love to our awakening humanity. The interaction and interplay between ego and soul and love is exquisitely articulated.” —Ahad Cobb, author of Early Lama Foundation

“As I was growing up and learning how to be a human being, Ram Dass—his books and his lectures—were my guideposts along the way. He was able to take what were to me complex Eastern religious philosophies and make them accessible. And then to meet and get to know him a bit—and to feel his true self and his kindness and humor and wisdom—was a gift.” —Ben Cohen, founder of Ben & Jerry’s Ice Cream

Ram Dass (1931–2019) first went to India in 1967. He was still Dr. Richard Alpert, an already eminent Harvard psychologist and psychedelic pioneer with Dr. Timothy Leary. He continued his psychedelic research until his journey to the East in 1967, driving overland to India, where he met his guru, Neem Karoli Baba, affectionately known as Maharaj-ji. Maharaj-ji gave him the name, Ram Dass, which means "servant of God." Everything changed then—his intense dharmic life started, and he became a pivotal influence on a culture that has reverberated with the words “be here now” ever since.


Be Here Now, Ram Dass's monumentally influential and seminal book, still stands as the highly readable centerpiece of the Western articulation of Eastern philosophy and practicing to live joyously in the present moment, be it luminous or mundane. From a backpackers’ bible in the 1970s, Be Here Now continues to be the instruction manual of choice for generations of spiritual seekers. Fifty years later, it's still part of the timeless present. Being here now is still being here now. Ram Dass's work continues to be a path of teaching and inspiration to so many. His loving spirit has been a guiding light for three generations, carrying millions along on the journey, helping free them from their bonds as he has worked through his own. For more about Ram Dass’s teachings, visit ramdass.org.

Rameshwar Das is a writer and photographer who met Ram Dass in 1968. Ramesh has collaborated with Ram Dass on many projects, most recently as coauthor of Be Love Now and Polishing the Mirror.

Anne Lamott is the acclaimed writer of more than a dozen books of fiction, nonfiction, and collected essays. Her most recent book was Small Victories: Spotting Improbable Moments of Grace. Known for her honest, humorous approach to subjects such as faith and loss, Anne has received the Guggenheim Fellowship, taught writing at UC Davis, and was the subject of an Academy Award-winning documentary.
Loading...
or support indie stores by buying on