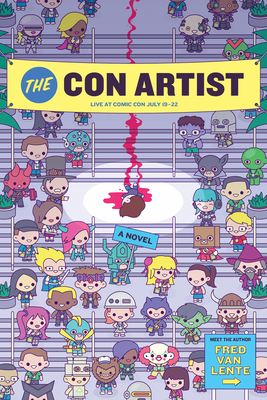 This illustrated mystery will appeal to comic book fans and anyone who appreciates an unconventional whodunit.

Comic book artist Mike Mason arrives at San Diego Comic-Con, seeking sanctuary with other fans and creators—and maybe to reunite with his ex—but when his rival is found murdered, he becomes the prime suspect. To clear his name, Mike will have to navigate every corner of the con, from zombie obstacle courses and cosplay flash mobs to intrusive fans and obsessive collectors, in the process unraveling a dark secret behind one of the industry’s most legendary creators.

Praise For The Con Artist: A Novel…

“A madcap mystery spoof set at Comic-Con…Mike’s efforts to prove his innocence keep the pages turning all the way to the surprising ending.”—Publishers Weekly

“The Con Artist is a fun book. Fred Van Lente gives the comic book industry in general and San Diego Comic-Con in particular a big wet kiss on the cheek, well aware of the warts that lie in wait.”—Book Reporter

“Filled with lively dialogue and an inside look at the comic industry.”—Ellery Queen’s Mystery Magazine

“Fred Van Lente knows comics. He also knows how to craft a compelling, memorable mystery. The Con Artist finds the author at full power, merging these two threads to create a fast-paced, impossible to put down novel. We all come out winning.”—Alex Segura, author of Blackout

“Comic-con devotees should get a kick out of the many, many Easter eggs Van Lente hides here.”—Booklist

“A delightful read. Filled with smart retorts, sharp descriptions, and the frantic, chaos-filled atmosphere inherent in all cons.”—New York Journal of Books

“A good book for comic book fans to read, but casual mystery readers should also enjoy this fun and engrossing mystery.”—Flickering Myth

“Aside from being chock-full of pop culture references, it’s also a commentary on the comics industrial complex—that there are those who had a hand in creating now-famous characters who have been forgotten or left behind.”—Geek Dad

“The Con Artist is a colorful, fast-paced novel that manages to bring out everyone's hidden geek by telling a compelling story full of mystery and action.”—BioGamer Girl

“Van Lente sucks you into the frenetic energy of the giant monster known as San Diego Comic-Con with his imagery and actual sketches.”—Geeks of Doom

Fred Van Lente is the #1 New York Times best-selling writer of such comics as The Amazing Spider-Man, Marvel Zombies, Deadpool vs the Punisher, GI Joe, Archer & Armstrong, and many more. He cowrote the graphic novel Cowboys and Aliens, which was made into a film starring Harrison Ford and Daniel Craig.