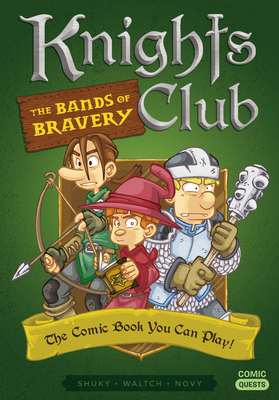 The Bands of Bravery: The Comic Book You Can Play (Comic Quests #2)

Magic, adventure, and triumphant battles await you in this graphic novel that plays just like a role-playing game. Choose to play as one of three brothers eager to join the Royal Order of Knights, and keep track of your hit points, abilities, and inventory on a handy adventure tracker sheet—then set off on your quest! The road to knighthood is a long one: you will journey through snowy mountains, haunted lakes, and dark forests in search of the bracelets of bravery, facing down trolls, wizards, and fellow warriors along the way. You will solve riddles, discover hidden compartments, learn combat techniques, and gather magical objects. With the analog fun of a tabletop game and the classic elements of a fantasy video game, you'll pick your own paths and forge your own knighthood in this irresistible comic book.

HERE’S HOW TO PLAY:
• Select your character and begin your quest.
• Numbers are hidden in every panel. Decide where you want to go next, and then flip to the panel with the matching number.
• Solve puzzles and collect bravery bracelets in your quest for success.
• If you fail your mission, just start again from the beginning! You can play the book again and again, making different choices every time.

Praise For Knights Club: The Bands of Bravery: The Comic Book You Can Play (Comic Quests #2)…

“In this innovative middle-grade graphic novel, readers choose their own path through a series of riddles and hidden passages as they craft an adventure that's unique to them.”—Game Informer, on Knights Club: The Bands of Bravery

“An immersive reading experience full of adventure and fun. The book series really can be enjoyed by all ages since its beautiful storytelling manages to capture its audience young & old alike.”—BioGamer Girl, on Knights Club: The Bands of Bravery

“It’s choose your own adventure for the modern generation of kids! As engaging and fun as a video game. And better for development.” - Sussan N., Librarian at Alsip-Merrionette Park Public Library, on Knights Club: The Bands of Bravery

“All good fun and it kept my son highly entertained...Knights Club would make an excellent and unexpected pick-up idea for a reader who may want a bit more input into their latest read.”—Grab This Book, on Knights Club: The Bands of Bravery

Everyone loves the Comic Quests series!

“For kids just diving into the genre, [Comic Quests is] a fantastic gateway and springboard to those more involved types of [role-playing] games.”—The Roarbots

“If you love reading, gaming, and magical animals, you’re going to fall head over heels for this brand new graphic novel series.”—YAYOMG!, on Hocus & Pocus: The Legend of Grimm’s Woods

“An interactive series that will appeal to reluctant readers and anyone who enjoys making a fun story.”—School Library Journal, on Hocus & Pocus: The Legend of Grimm’s Woods

“An exciting and adventurous way to encourage young people to read, as well as hone their critical thinking and problem-solving skills.”—Midwest Book Review, on Iron Magicians

“Great for commutes, waiting in long lines, or any instance where you're stuck without anything to do or anyone to talk to. Or, you know, simply because you want to play an RPG by yourself!.”—Sequential Tart, on Iron Magicians

“Fun for kids of all ages.”—Really Into This, on Hocus & Pocus: The Legend of Grimm’s Woods

Novy is a comics author, letterer, and an illustrator living in France.
Loading...
or support indie stores by buying on
(This book is on backorder)