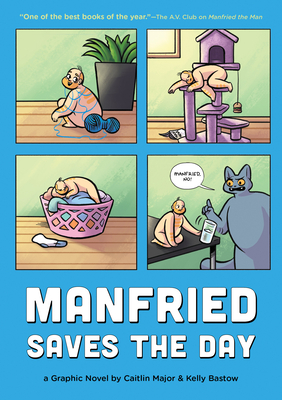 A Graphic Novel (Manfried the Man #2)

Can a pet man who spends most of his time eating and sleeping take first prize at the Manflower Man Show? If not, the local shelter for stray men will be forced to shut down forever! Based on the hilarious webcomic, this sequel to Manfried the Man is an all-new stand-alone story that can be enjoyed by followers of the series and new fans alike.

Praise For Manfried Saves the Day: A Graphic Novel (Manfried the Man #2)…

"The world that Bastow and Major have built together has a lot more story to offer, and readers will be eager for more once they dive in."—Paste

“If you're a pet owner, this book will leave you itching to cuddle up with your pet or take them outside for a walk or some playtime together.”—Newsarama

Kelly Bastow is a comics creator and commercial illustrator. She illustrated Quirk Books’ The Fangirl’s Guide to the Galaxy and has drawn for the comics Lumberjanes, Adventure Time, and Capture Creatures. She self-published the graphic novel Wax and Wane (coloring by Caitlin Major), and her 2017 autobiographical comic, Year Long Summer, was nominated for an Ignatz Award.
Loading...
or support indie stores by buying on