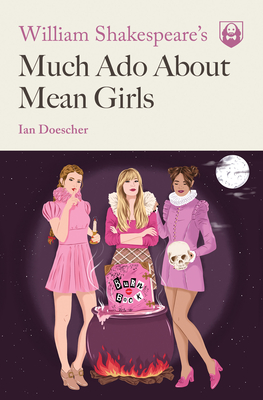 On Wednesdays we array ourselves in pink! Mean Girls gets an Elizabethan makeover in this totally fetch comedy of manners about North Shore High’s queen bees, wannabes, misfits, and nerds. Written in the style of the Bard of Avon, William Shakespeare’s Much Ado About Mean Girls tells the story of Cady Heron’s rise from home-schooled jungle freak to one of the most popular girls in school. Every scene and line of dialogue from the iconic script is reimagined in authentic Shakespearean rhyme, meter and stage directions, complete with dramatic asides from Janis, Damian, Gretchen, and Karen. By the end, you’ll be surprised that Shakespeare didn’t pen this classic story of rivalries, betrayal, jealousy, obsession, and fastidious rule-making about when one can and cannot wear sweatpants.

“Much Ado About Mean Girls reimagines Tina Fey’s screenplay as an Elizabethan play. It’s a tricky premise to get right, but Doescher hits the mark.”—Paste

“[William Shakespeare's Much Ado About Mean Girls] will delight with its depth.”—Booklist

“If this first entry in the wider Pop Shakespeare universe is anything to go by, Doescher will be on bookshelves and in homes for many more years to come.”—Manhattan Book Review

“When it comes to Doescher’s ability to cleverly and faithfully convert our favorite movies into Shakespearean masterpieces, the limit doth not exist.”—Geeks of Doom

“Such an unexpectedly exciting and funny read...the way William Shakespeare’s Much Ado About Mean Girls is written is so seamless, it feels like the two worlds truly belong together.”—The Concordian

“Doescher is basically a genius...If you loved the movie Mean Girls or just appreciate pop culture, give William Shakespeare's Much Ado About Mean Girls a try.”—Roots & Reads

Ian Doescher is the New York Times best-selling author of the William Shakespeare’s Star Wars® series, the Pop Shakespeare series, and MacTrump. He has written for Marvel Comics and is a contributing author to the story collection Star Wars: From a Certain Point of View. He lives in Portland, Oregon, with his family. Visit him at IanDoescher.com.
Loading...
or
Not Currently Available for Direct Purchase