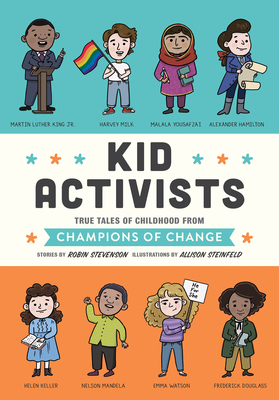 True Tales of Childhood from Champions of Change (Kid Legends #6)

Every activist started out as a kid—and in some cases they were kids when their activism began! But even the world’s greatest champions of civil liberties had relatable interests and problems--often in the middle of extraordinary circumstances. Martin Luther King, Jr. loved fashion, and argued with his dad about whether or not dancing was a sin. Harvey Milk had a passion for listening to opera music in different languages. Dolores Huerta was once wrongly accused of plagiarizing in school.

“The vivid details of each activist's story, combined with vibrant illustrations, demonstrate that every civil rights hero and popular firebrand started out as children, just like the rest of us.”—School Library Journal

“Kids will be drawn in.”—Chicago Parent

“In accessible but never patronizing prose, [Stevenson] sketches the stories of her subjects' childhoods, deftly setting the scene for each one and providing informative details, engaging quotes, and sometimes humorous anecdotes.”—Mombian

“With comic-like illustrations by Allison Steinfeld, kids will be drawn in by the short chapters and stories of history-changing grownups who were once children, too.”—Metro Parent

“Illustrate[s] a wide variety of early influences and backgrounds, proving to kids that where they come from isn't important when fixing something that is.”—Terri Schlichenmeyer, Bookworm Sez

“An engrossing page-turner that will leave readers of all ages feeling inspired and empowered!”—Word Spelunking

Praise for the Kid Legends series:
“Just like history class, only hilarious.”—Tim Federle, author of Better Nate Than Ever, on Kid Presidents by David Stabler

“With cartoonish illustrations that will attract fans of Jeff Kinney’s The Diary of a Wimpy Kid and Rachel Renée Russell’s The Dork Diaries, this informative offering leaves no presidential childhood rock unturned.”—School Library Journal, on Kid Presidents by David Stabler

“I can think of no better way to convey to children that their heroes were once just like them.”—Fredericksburg Free-Lance Star, on Kid Scientists by David Stabler

“Filled with cute illustrations. . . [and] mini-biographies that are interesting, funny, and, most importantly, relevant to kids today.”—Geek Dad, on Kid Scientists by David Stabler