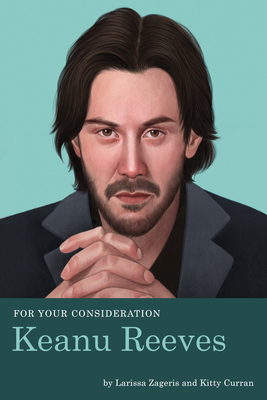 This illustrated collection of humorous essays and fun extras makes the case for one of our most iconic celebrities, from Bill and Ted to John Wick.

Critics have long debated Keanu Reeves’s career, but one thing is for certain: over the course of thirty years, the seemingly immortal actor has constantly subverted Hollywood stereotypes and expectations of A-listers, without (always) sacrificing commercial success. He’s the type to start his own publishing company, quote Hamlet, give away his salary to film crews, and generate memes through the simple act of eating lunch. Along the way, he has transcended the ironic gaze of the internet to become the true object of its affection, prompting a cultural phenomenon known as the Keanussance.

Composed of five critical essays and fun extras, For Your Consideration: Keanu Reeves looks at the distinct phases of the legendary actor’s career, from Bill and Ted to the John Wick franchise, and examines the ways in which Keanu strives to be excellent and kind in work and life.

Praise For For Your Consideration: Keanu Reeves…

“A pop-culture smorgasbord that reveals the hows and whys of [Keanu Reeves’] staying power in the film industry since Bill & Ted’s Excellent Adventure.”—Chicago Tribune

“Just the right amount of goofy jokes, paired with surprisingly deep moments that leave you going ‘woah.’”—Women Write About Comics

“If you're a Keanu Reeves fan, you have to buy this book.”—WGN

“Fans of Keanu Reeves will absolutely appreciate this book, while those who have a general knowledge of him will definitely enjoy this off-beat look at the man, his career, and the cultural phenomenon he's sparked.”—Geeks of Doom

“Manages to take a look at one of the most beloved actors of our time...[an] excellent adventure.”—BioGamer Girl

Larissa Zageris and Kitty Curran are a creative duo based in Chicago. They are the authors of My Lady’s Choosing (Quirk, 2018), the viral Kickstarter novel Taylor Swift: Girl Detective in The Secrets of the Starbucks Lovers, and the comic “13 Go Mad in Wiltshire,” which appeared in The Wicked + The Divine: The Funnies Special (Image, 2019).
Loading...
or
Not Currently Available for Direct Purchase