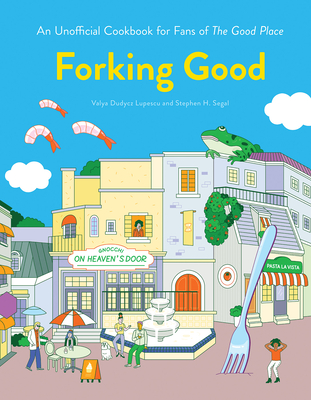 An Unofficial Cookbook for Fans of The Good Place

For fans of The Good Place, now available on Netflix, a pun-filled and fully illustrated cookbook of 30 original recipes inspired by the philosophy and food humor of the hit show.

With its high concept, exceptional writing, eye-popping set design, stellar cast, meaningful explorations of what it means to be a good person, and clam chowder fountains, The Good Place has captured the hearts and minds of critics and viewers alike.

For the first time ever, fans can indulge their cravings for The Good Place with delicious, comforting, original recipes like “Macaroni and Socra-cheese,” “I Think Therefore I Clam (Chowder),” “I Kant Believe It’s Not Buttermilk Pancakes,” and more. Each recipe title references a philosopher or philosophical concept from the show and uses food analogies to explain those concepts to readers who, like Eleanor, can’t always follow Chidi’s lectures.

A refreshing and entertaining twist on cookbooks, Forking Good will help you plan your next viewing party as you re-binge your favorite show.

Praise For Forking Good: An Unofficial Cookbook for Fans of The Good Place…

“Unlike any cookbook you've encountered previously...It's educational and thoughtful...And the resulting recipes? Well, they're absolutely delicious...Fans of The Good Place will absolutely love this cookbook.”—Hypable

“Can't help but feel good when watching NBC's The Good Place? You'll feel even better when watching it while whipping up a recipe from the show's unofficial cookbook.”—SheKnows.com

“[The recipes] include a fun, easy to understand philosophy lesson that might not keep the cook out of the Bad Place, but would make a fun dinner party.”—The Palm Beach Post

“An extended inside joke that show fans will delight in adding to their shelves, Forking Good is a comfort-food laden, lightly philosophical cookbook worth indulging in.”—Foreword Reviews

Valya Dudycz Lupescu is the author of The Silence of Trees and the coauthor of Geek Parenting. Her story “Honey,” about dinnertime hospitality at moments of life-or-death, appeared in the Publishers Weekly starred anthology A World of Horror. Her food writing has most recently appeared in the cheese magazine Culture.

Dingding Hu is a New York based illustrator, best known for her delightful illustration work featuring adorable food and hilarious characters. She has worked on projects for Google, the Museum of Chinese in America, and MIT Media Lab. Her work has appeared in Time Out, the New York Times, and Lucky Peach. She is the recipient of a silver medal in the digital media category at the Comic and Cartoon Annual by the Society of Illustrators. For more information, visit dingdinghu.com and her Etsy shop, Hu is Hungry.
Loading...
or
Not Currently Available for Direct Purchase