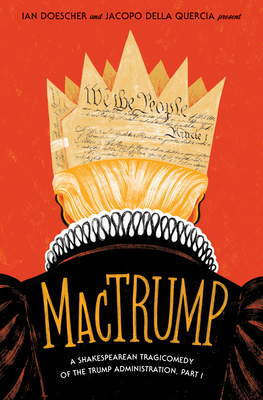 A Shakespearean Tragicomedy of the Trump Administration, Part I

For readers craving a humorous antidote to the sound and the fury of American politics, this clever satire, written in iambic pentameter in the style of Shakespeare, wittily fictionalizes the events of the first two years of the Trump administration.

No one thought that MacTrump—Lord of MacTrump Towers, Son of New York—would ascend to the highest position in the kingdom. Yet with the help of his unhappy but dutiful wife Lady MacTrump, his clever daughter Dame Desdivanka, and his coterie of advisers, MacTrump is comfortably ensconced in the White Hold as President of the United Fiefdoms, free to make proclamations to his subjects through his favorite messenger, McTweet.

The Democrati, mourning the loss of their cherished leader O’Bama, won’t give up without a fight. They still remember the disastrous reign of George the Lesser, and they can see Putain’s dark influence on MacTrump. Their greatest hope is MacMueller, tasked with investigating the plot that empowered MacTrump’s rise to the throne.

As Desdivanka schemes to overthrow her father’s councilors, and as Donnison and Ericson—trapped in their own Rosencrantz and Guildenstern-like storyline—prove useless to their father, MacTrump soon realizes he has no true allies. Will he be able to hold on to his throne? Only time will tell in this tragicomic tale of ambition, greed, and royal ineptitude.

Praise For MacTrump: A Shakespearean Tragicomedy of the Trump Administration, Part I…

Ian Doescher is the New York Times best-selling author of William Shakespeare’s Star Wars and the Pop Shakespeare series. He lives in Portland, Oregon, with his family.

Jacopo Della Quercia is the pseudonym for a former Obama staffer. He is the author of The Great Abraham Lincoln Pocket Watch Conspiracy and License to Quill, a scholar with the New York Council for the Humanities, and a history writer who has authored more than 100 articles for the comedy website Cracked.com.
Loading...
or support indie stores by buying on