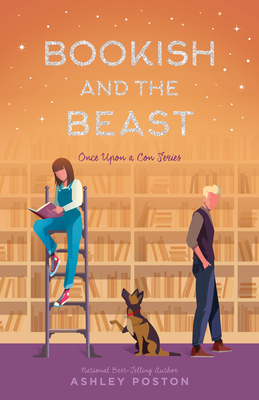 Bookish and the Beast (Once Upon A Con #3)

A tale as old as time is made new in Ashley Poston's fresh, geeky retelling of Beauty and the Beast.

In this third book of the Once Upon a Con series, we meet Rosie Thorne—a young woman feeling stuck. She’s stuck on her college application essays, stuck in her small town, and stuck on that mysterious General Sond cosplayer she met back at ExcelsiCon. But most of all, she’s stuck in her grief over her mother’s death. Her only solace was her late mother’s library of rare Starfield novels, but even that disappeared when she and her dad sold it to pay off hospital bills.

Then there’s Vance Reigns—he’s been Hollywood royalty for as long as he can remember, with all the privilege and scrutiny that entails. Vance’s world comes crashing down when a tabloid scandal catches up to him and he’s forced to hide out somewhere the paparazzi would never think to look: Small Town USA. At least the house he’s stuck in has a library. Too bad he doesn’t read.

When their paths collide and a rare book is destroyed, Rosie must work to repay the debt. But while most superfans would jump at the chance to be anywhere near Starfield’s handsome hunk, Rosie would rather be anywhere but. Vance is a jerk, she can’t stand him, and the feeling is mutual.

But as this pair of opposites begrudgingly gets closer and their careful masks come off, they may just find there’s more risk in shutting each other out than in opening up their hearts.

Praise For Bookish and the Beast (Once Upon A Con #3)…

“A fairy-tale story that will capture the hearts of book lovers everywhere.”—CNN

“Brilliantly structured modern retellings of classic fairytales...packed with adorably angsty romance.”—Sweety High, on the Once Upon a Con series

“A humorous twist on ‘Beauty and the Beast.’…This rom-com told in alternating viewpoints is poised to steal any book geek's heart.”—Booklist

“Will give fans a reason to cheer....great storytelling, with a lot of amusing flourishes.”—School Library Journal

“Enjoyable, moving, and easy to read, like eating a smooth, sweet bowl of ice cream.”—New York Journal of Books

“This well-developed story is for anyone who loves a good angsty and fun modern-day fairy tale.”—San Francisco Book Review

“One of those rare books that make me want to scream from the top of every bookstore in town, ‘READ THIS ONE!!’”—GeekMom

“What Poston has always done best...is capture what it's like to be a geek, and this book is no exception.”—Twin Cities Geek

Praise for The Princess and the Fangirl:
#3 on Seventeen's Best Young Adult Books of 2019 So Far List
A 2019 Goodreads Choice Awards Semifinalist

Ashley Poston loves dread pirates, moving castles, and starry night skies. When not geeking out at comic-cons, she lives in South Carolina with her cat named Pepper. She is the author of the Heart of Iron duology, as well as the Once Upon a Con series. She can be found online at ashposton.com.
Loading...
or support indie stores by buying on