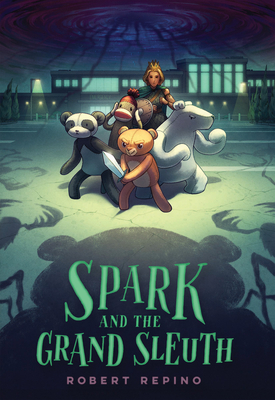 Spark and the Grand Sleuth

An army of toys, a menacing threat, and a thrilling adventure collide in the high-stakes sequel to middle grade adventure Spark and the League of Ursus.

Spark may be a cute and cuddly teddy bear, but she’s also a fierce protector. Weeks after rescuing her human owner—a budding young filmmaker named Loretta—from a hideous monster, everything seems to be returning to normal. But then Spark is summoned before the mysterious Grand Sleuth, the high council of teddy bears, who task her with a dangerous mission: locating the portal to the monster’s world.

During her daring quest, Spark discovers a terrible secret that changes everything. In order to keep Loretta and their whole town safe, she must enlist the help of her loyal toy friends and team up with an unexpected ally. As the menace grows, Spark realizes that Loretta has a hidden power that may be the key to saving them all . . .

This dark middle grade fantasy is perfect for fans of the Nightmares! series and Holly Black’s Doll Bones.

Praise For Spark and the Grand Sleuth: A Novel (League of Ursus #2)…

Praise from Spark and the League of Ursus

Robert Repino is the author of the War with No Name series for adults and The League of Ursus duology for children. He lives in New York, where he works as an editor at a scholarly press and teaches at the Gotham Writers’ Workshop. Robert had two special teddy bears when he was growing up: Bear and Blue Bear.
Loading...
or support indie stores by buying on