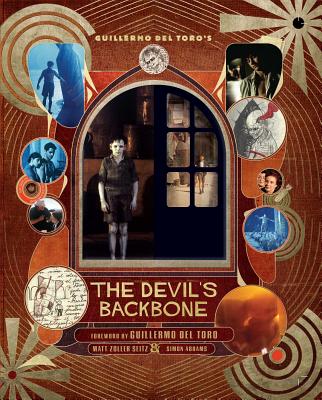 Explore the creation of Guillermo del Toro’s early masterpiece through this visually stunning and insightful look at the spine-chilling classic.

Released in 2001, Guillermo del Toro’s The Devil’s Backbone announced the director as a singular talent with a unique ability to mix the macabre with the sublime. A spiritual companion piece to his Oscar-winning Pan’s Labyrinth (2006), the film shares similar themes and is also set against the backdrop of the Spanish Civil War, a brutal conflict that turned ordinary men into monsters.

Through a series of in-depth and extremely candid interviews with the director, this deluxe volume not only explores the shooting of the film but also delves into a range of other topics with del Toro, including his influences, his uniquely nuanced approach to filmmaking, and the traumatic personal events that colored the creation of The Devil’s Backbone.

The book also draws on interviews with key contributors in the film’s creation, including cinematographer Guillermo Navarro and composer Javier Navarrete, to give readers an exclusive, behind-the-scenes look at how this gothic horror masterpiece was crafted. Featuring a wealth of exquisite concept art and rare unit photography, Guillermo del Toro’s The Devil’s Backbone is the ultimate behind-the-scenes look at an unforgettable Spanish-language classic.

Matt Zoller Seitz is the editor-in-chief of RogerEbert.com, the TV critic for New York Magazine, the author of The Wes Anderson Collection and The Oliver Stone Experience, and the co-author of TV (The Book). He is based in New York City.

Simon Abrams is a New York–based film critic and regular contributor to the Village Voice, RogerEbert.com, and Vulture. He has written about horror movies, comics, and opera for the New York Times, Nashville Scene, LA Weekly, and other outlets.

Guillermo del Toro is the acclaimed director of Pan's Labyrinth, Hellboy, Pacific Rim, and Crimson Peak. His Strain novels are international best sellers. He lives in Los Angeles.
Loading...
or support indie stores by buying on