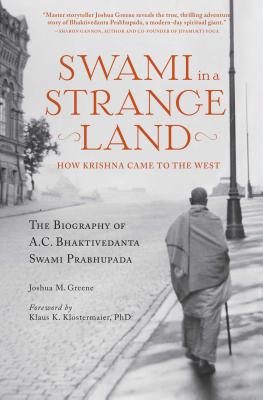 Swami in a Strange Land

How Krishna Came to the West

Discover the man behind the movement in this intimate biography of A. C. Bhaktivedanta Swami Prabhupada, founder of the International Society of Krishna Consciousness (ISKCON).

In 1965, a seventy-year-old man—soon to be known as Prabhupada—set sail from India to America with a few books in his bag, pennies in his pockets, and a message of love in his heart. He landed in New York at the peak of the revolutionary counterculture movement of the ’60s, and went on to spark a global spiritual renaissance that led to the creation of the International Society for Krishna Consciousness, which has changed millions of lives.

Through the depiction of Prabhupada as both an enlightened luminary and a personable, funny, and conscientious individual, Swami in a Strange Land shows why cultural icons such as George Harrison and Allen Ginsberg incorporated Prabhupada’s teachings into their lives, and why millions more around the globe embarked upon the path of bhakti yoga in his footsteps.

Carefully researched, skillfully crafted, and extraordinarily intimate, this narrative follows Prabhupada as he rises from an anonymous monk to a world-renowned spiritual leader. Set in locations as far ranging as remote Himalayan caves and the gilded corridors of Paris’s City Hall, Swami in a Strange Land traces the rise of Eastern spirituality in the West—and in particular, the rise of yoga culture and vegetarianism and the concepts of karma and reincarnation.

A remarkable journey into the deepest dimensions of the human experience, Swami in a Strange Land shows how one man with a dream can change the world.

Joshua M. Greene is a renowned Holocaust scholar and filmmaker whose biographies have sold more than a half-million copies worldwide. He is a popular lecturer whose has spoken at the Pentagon and before the Judge Advocates College. His documentaries on Holocaust history have aired on PBS and Discovery. He has appeared in several national media outlets, from “Fresh Air with Terri Gross” and NPR to FOX News, CNN-TV, and more.
Loading...
or
Not Currently Available for Direct Purchase