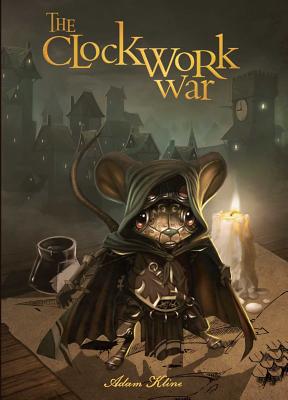 To battle a menacing evil figure, a group of children team up with amazing mechanical machines built by genius clockmaker Karl Indergarten.

Best friends Karlheinz Indergarten and Leopold Croak clash in an epic, imaginary battle waged in the branches of an enormous, ancient oak tree. But when lightning strikes young Leopold, he loses his imagination, and with it, his sense of right and wrong. The damaged boy grows to adulthood, treading a sinister path of industrial conquest. And Leopold’s thirst for power soon threatens the tree, the village, and worst of all, the children within.

But humble Karl discovers a gift for clockwork—the magic of gears and cogs—and assembles a mechanical army to fight back. Joined by the children themselves, Karl endeavors to save the village, the ancient oak, and maybe—just maybe—something more besides.

Dan Whisker—a self-taught illustrator—was previously a member of the British armed forces for several years and then a serving Detective Constable with Kent Police. Dan has now sought a new career in something that he has always dreamed of doing and that is creating art for children’s fiction and non-fiction. Originally born in Essex in 1972, Dan moved to Kent as a child and finally settled in the green and tranquil village of Chartham—a stone’s throw from Canterbury where he lives with his loving wife of twenty years. He has three teenage children and three small dogs.
Loading...
or
Not Currently Available for Direct Purchase