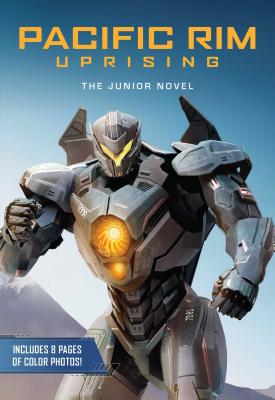 Jake Pentecost is a rebellious former Jaeger pilot who abandoned his training only to become caught up in a criminal underworld. Ten years ago, his legendary father gave his life to secure humanity’s victory over the monstrous Kaiju. When an even more unstoppable threat is unleashed to bring the world to its knees, Jake’s estranged sister Mako Mori gives him one last chance to live up to his father’s legacy. She is leading a brave new generation of pilots who have grown up in the shadow of war, including gifted rival pilot Lambert and fifteen-year-old Jaeger hacker Amara. As Jake joins the heroes of the Pan Pacific Defense Corps in battle, they become the only family he has left. Rising up to become the most powerful defense force to ever walk the earth, they unite in a spectacular all-new adventure on a towering scale.

Based on the epic movie premiering March 23, 2018, Pacific Rim Uprising: The Junior Novel retells the exciting story of the new heroes of the PPDC and features eight pages of full-color photos from the film.

Rebecca Matheson is an author of adult fiction, nonfiction, and children's books. Formerly an editor in the publishing industry, she now enjoys writing for franchise entertainment companies and publishing houses. She lives in Philadelphia, Pennsylvania.
Loading...
or
Not Currently Available for Direct Purchase