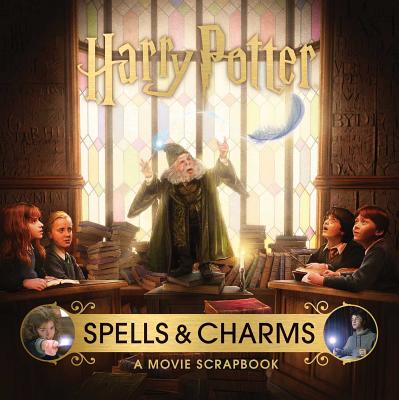 Spells and Charms: A Movie Scrapbook

Packed with inserts, concept illustrations, and behind-the-scenes photography, Harry Potter: Spells and Charms: A Movie Scrapbook is a guide to the spells and incantations of the Harry Potter films.

This magical movie scrapbook takes readers on a behind-the-scenes tour of iconic spells and charms—from Expelliarmus to the Patronus Charm, and even the three Unforgivable Curses. Detailed profiles include concept illustrations, set photography, and fascinating reflections from the actors and filmmakers about bringing different spells and charms to the big screen. Fans can also relive key scenes in the films when these spells are utilized, including Professor Flitwick’s first Charms class, the first task of the Triwizard Tournament when Harry summons his broom with the Accio spell, and the attack at the Great Lake where Harry uses Expecto Patronum against a swarm of Dementors. Filled with a wealth of bonus inserts, Harry Potter: Spells and Charms: A Movie Scrapbook is a must-have collectible for all Harry Potter fans.