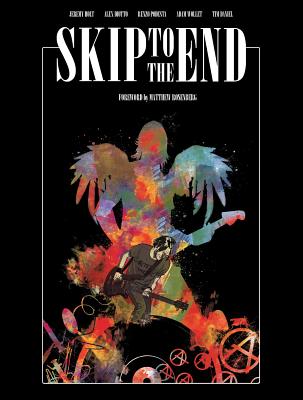 Skip to the End

Bassist-turned-junkie Jonny Wells is addicted to his past, and the only way to get there is through the music.

The bassist of a breakout '90s punk band, Jonny falls apart when his band mate and best friend Kirk commits suicide. Twenty years later he struggles with heroin addiction, lost in the songs they created and desperate to relive the past, when he discovers that he can—literally. With the aid of a mysterious guitar, Jonny begins to make trips back in time, searching for the roots of Kirk’s unraveling. At Nar-Anon meetings and in conversations with his sponsor Emily, he starts to cope with the events that led to Kirk’s death. But by the time Jonny realizes that his visits can’t change the present, he might be too addicted to stop.

Praise For Skip to the End…

"The story, penned by Jeremy Holt, is solid and very entertaining."

"Artistically, the book is a master class on beauty and style. I’ve read the hard cover edition which is nothing short of gorgeous. From the initial title page to the end of the story, Artist Alex Diotto, Colorist Renzo Podesta, and Letterer Adam Wollet, prove themselves to be masters of their craft and the passion for their work is easily witnessed."
— Comic Crusaders

"Writer of indie comics Pulp and Southern Dog, Jeremy Holt slays on the script for Skip to the End."

"It’s a deeply intimate story with some universal themes, and there’s a gentle but firm honesty to the way the characters are drawn and written. It’s a slice-of-life comic, an adventure comic and a music comic all rolled into one, born out of a love for all three."

"Skip to the End is a graphic novel worthy of spiritual preparation, deserving of ones wholehearted attention where the finer details are meticulously observed."

Jeremy Holt is a Vermont-based author whose most recent works include After Houdini, Skip to the End, Skinned (Insight Comics), Southern Dog (Action Lab), and Pulp (comiXology), which IGN has called, "...one of the best one-shot comics of the year." When he's not writing, this Mac Genius is fixing computers, and getting confused for his identical triplet brothers. Follow him on Twitter @Jeremy_Holt.
Loading...
or
Not Currently Available for Direct Purchase