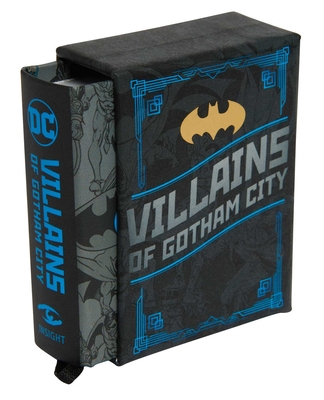 Delve into the scoundrels and criminals of BATMAN's Rogues Gallery in this miniature art book.

No hero in comic history has been more defined by his adversaries than BATMAN. From THE JOKER's warped and murderous pranks to CATWOMAN’s villainous thievery, TWO-FACE’s coin-flipping chaos, and HARLEY QUINN’s red-and-black insanity, BATMAN's villains have played a key role in his comics history and built pop culture followings of their own. Now fans can enjoy this dark and demented mini collection of art for each member of BATMAN’s Rogues Gallery.

Featuring quotes, fascinating facts, and images of dozens of different BATMAN villains, this pocket-sized art collection lets fans carry their favorite BATMAN characters with them everywhere. Part of Insight Editions’ new collectible series of miniature books, this is the perfect gift for any fan.

Scott Campbell, sometimes known as Scott C., is the creator of the GREAT SHOWDOWNS online series and Double Fine Action Comics. He was art director and concept artist at Double Fine Productions on such games as Psychonauts, Brutal Legend, and Broken Age. His illustrated picture books include Zombie in Love, Zombie in Love 2 + 1, East Dragon West Dragon, XO, OX: A Love Story, Bob Dylan’s If Dogs Run Free and Hug Machine, in which he has written the words as well as created the pictures. Scott lives in New York City.
or support indie stores by buying on