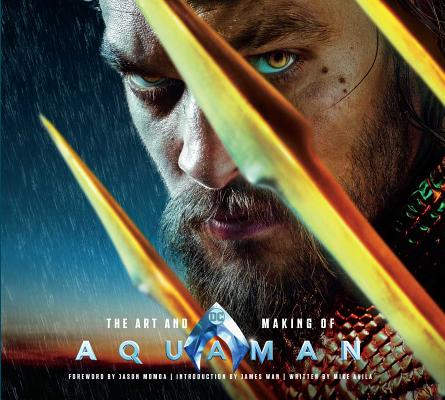 The Art and Making of Aquaman (Hardcover)

Immerse yourself in the art and making of Aquaman, the movie chronicling Arthur Curry’s path to a future reign as King of the Seven Seas.

The Art and Making of Aquaman takes readers behind the scenes of the highly anticipated 2018 Warner Bros. Pictures film based on the popular DC character. Featuring previously unseen photographs and breathtaking concept art, this book is a must-have for any fan. Witness the epic journey of Aquaman, a Super Hero who struggles to accept his heritage as undersea royalty in his first solo film.

Follow along with the production team as these skilled artists create a unique undersea world for the big screen. Exclusive interviews highlight a comprehensive narrative that flows through this stunning collection of concept sketches, storyboards, set and costume photography, and effects imagery, giving readers an unparalleled look at the making of the film.

Mike Avila is the author of The Art and Making of Aquaman and an Emmy Award–winning TV producer and journalist who has worked for NBC, CBS, and ABC. As a digital journalist, he has covered entertainment, writing about film, television, and comic books for outlets such as SFX, SYFY Wire, and the Hollywood Reporter.

Praise For The Art and Making of Aquaman …

"This book is the book that keeps on giving."
— The Geek of Steel

"The artwork within is as beautiful as the film itself."