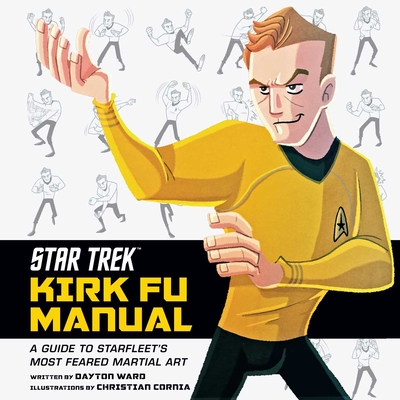 As captain of the legendary U.S.S. Enterprise, James T. Kirk engaged in his share of fisticuffs, besting opponents with a slick combination of moves and guile that remains unmatched. Is there anyone you’d rather have watching your back as you take on Klingons, alien gladiators, genetically engineered supermen, and even the occasional giant walking reptile?

Kirk Fu is a series of unarmed combat techniques developed by one of Starfleet’s most celebrated starship captains over several years of encounters with alien species on any number of strange new worlds. A blend of various fighting styles, Kirk Fu incorporates elements of several Earth-based martial arts forms as well as cruder methods employed in bars and back alleys on planets throughout the galaxy. It is as unorthodox in practice as it is unbelievable to behold. Including excerpts from Kirk’s own notes and personal logs, the Star Trek: Kirk Fu Manual is the perfect training guide for surviving the depths of space. With proper training and practice, every Starfleet cadet can become one with Kirk Fu.

Christian Cornia is an Italian artist who has created designs for many publishers, advertisers, video games, and role-playing games. He currently works with the international illustration agency Advocate Art and teaches character animation design at the Reggio Emilia International School of Comics. Christian’s most notable work includes several Scooby-Doo projects, inking for Marvel Comics, and illustrating the graphic novel Brina, which was published by Tunué in 2017. More artwork at www.christiancornia.it