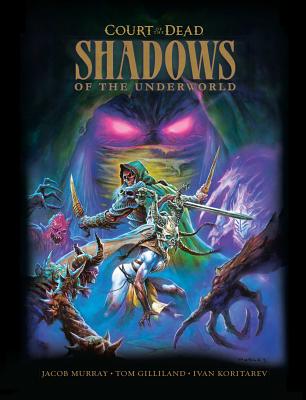 Court of the Dead (Hardcover)

Shadows of the Underworld: A Graphic Novel

From the highly creative teams of Sideshow Collectibles and Insight Comics comes the next graphic novel installment of the Court of the Dead universe: Shadows of the Underworld!

Before the Underworld can rise up and end the war between heaven and hell, they must first defeat the darkness within themselves: The Dreadsgrip.

The power reaped from mortal souls comes at a significant cost. Any reapers that siphon too much ethereal power from the harvest may lose themselves to the Dreadsgrip, an irresistible thirst to destroy. Now, a rogue agent in Death’s Underworld is stoking a mutiny, fueled by the terrible Dreadsgrip plague that affects all denizens of the Underworld—a plague that could derail the leader of the Underworld, the Alltaker’s plans to rise up against the celestial powers of both heaven and hell.

With this growing curse reverberating throughout the Alltaker's kingdom, Death’s impulsive daughter Kier must join forces with the Queen’s intractable right hand, Exraile, to root out and destroy this danger to the land between. These mighty warriors, caught in the midst of a celestial war, will need more than just their swords to slice through the Shadows of the Underworld.

Tom Gilliland has led the creative direction of Sideshow Collectibles for the last 15 years. A head full of D&D and heavy metal imagery, coupled with a near-death experience, have formed the genesis of Tom's exploration of the darker aspects of heroism, along with an appreciation for the twisted and subversive.

Ivan Koritarev has been an artist in the gaming industry for over 12 years, working on titles such as Ghost Recon, Assassin's Creed, and Rayman.

Jacob Murray is a television professional, writer, and filmmaker. For the past decade, he has worked in sitcoms, primarily on The Big Bang Theory. In between episodes, Jacob charted an unconventional course through the blogosphere and screenplays before finding himself writing comic books with Sideshow Collectibles.
or support indie stores by buying on
Copyright © 2020 American Booksellers Association