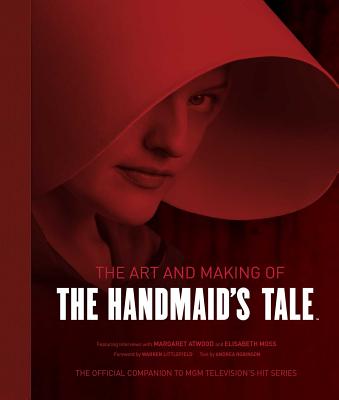 The Art and Making of The Handmaid's Tale

Explore the world of Gilead with this behind-the-scenes look at the award–winning show The Handmaid’s Tale.

Delve deep into the dystopia of Gilead as interviews with the show’s cast and creators provide insight into the inspiration behind the characters, settings, and themes, as well as its parallels to the real-world political climate. Showcasing striking visuals and insightful commentary, The Art and Making of The Handmaid’s Tale is the definitive exploration of one of television’s most critically acclaimed shows.

Praise For The Art and Making of The Handmaid's Tale…

"A trove of insights into the meticulous work done to create the terrifying world of Gilead in Hulu’s acclaimed adaptation."
— Den of Geek

"The Art and Making of the Handmaid's Tale captures the essence of these troubling times, featuring rich and thoughtful bonus content such as interviews with Margaret Atwood herself."
— Bookstr

Andrea Robinson is a New York–based editor and author. She is the author of The Vampire Diaries: Unlocking the Secrets of Mystic Falls and Buffy the Vampire Slayer: The Official Grimoire. Her young adult novel, Vampire Crush, published under the name A. M. Robinson, was a featured selection of the Scholastic Book Club.
Loading...
or
Not Currently Available for Direct Purchase