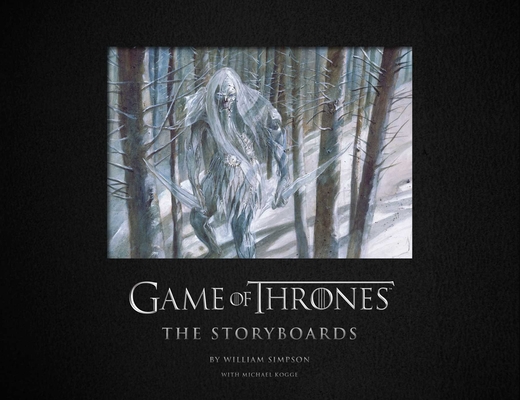 The Storyboards, the official archive from Season 1 to Season 7

The official collection of behind the scenes storyboard art from HBO’s landmark TV show Game of Thrones. Learn how lead storyboard artist William Simpson helped the show creators envision some of Westeros’s most iconic characters, locations, and events, such as the White Walkers, the Three Eyed Raven, and the epic ascent of the Wall.

• INTRICATE DETAIL - 320 pages of incredibly detailed storyboards and in-depth commentary on the creation of Game of Thrones most memorable moments.
• FILMMAKING REVEALED - Learn how Westeros leapt from sketch to screen, including Daenerys’s emergence from Khal Drogo’s funeral pyre, the death-defying ascent of the Wall, and Jon Snow’s epic encounter with the White Walkers at Hardhome.
• HEAR FROM THE SHOW CREATORS - Includes exclusive foreword from Game of Thrones showrunners David Benioff and D. B. Weiss.
• A DESIRABLE COFFEE TABLE BOOK - Deluxe 12 × 9.75 inch format including exclusive slipcase.
• PERFECT GIFT FOR FANS AND FILMMAKERS ALIKE - Released in time for the holiday season, this is the perfect gift for Game of Thrones fans.

Praise For Game of Thrones: The Storyboards, the official archive from Season 1 to Season 7…

"A stunning coffee table book that rather remarkably goes season by season and episode by episode. Full of intricate detail and a few surprises, this is, quite frankly, a book die-hard fans will treasure. It’s also a reminder that even before the series became the pop phenomenon we know today, it was an imaginative, emotionally powerful tale of heroism, romance, and darkness."
— The Film Stage

William Simpson is a comic artist based in Northern Ireland. He is the lead storyboard artist for GAME OF THRONES.

Michael Kogge is a screenwriter and author who has penned many books, most notably the junior novels for Star Wars: The Force Awakens, the Star Wars Rebels animated series, and Batman v Superman: Dawn of Justice.
or support indie stores by buying on