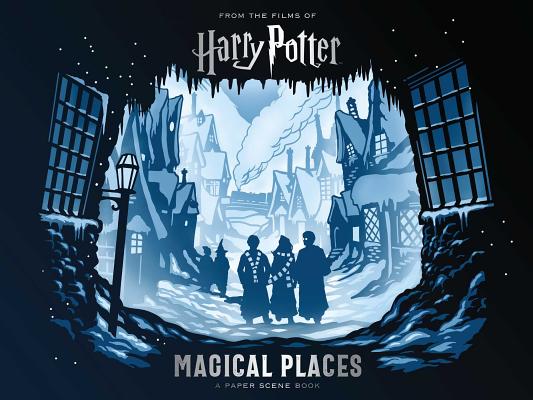 Discover the magical places of the Harry Potter films in one-of-a-kind 3-D scenes.

Revisit the magic of Harry Potter through four intricate, multilayered dioramas that capture beloved locations from the films. From Hogwarts to Hogsmeade, Diagon Alley, and the Ministry of Magic, each paper scene is laser die-cut for precision and gorgeously detailed. Every scene is accompanied by essential information about these magical places and fun, behind-the-scenes facts from the films.

Designed to thrill both seasoned Harry Potter fans and younger children, this volume is a treasured keepsake for the whole family.

“Gorgeously detailed images of places like Diagon Alley and Hogsmeade, where you'll surely feel like you can literally step foot into Hog's Head for a Butterbeer.”
— Romper.com

“To enter and be surrounded by such wonder and whimsy can feel truly magical.”
— Geekdad

“Magical Places is the collector’s item that Potterheads would adore.”

“The paper scenes are delicate and intricate… a great work of art.”

"These immersive depictions of Potter locales are combined with behind-the-scenes details and descriptions to throw you further than ever into Harry’s world."
— Mental Floss

“Allows the reader to be transported to the magical wizarding world.”