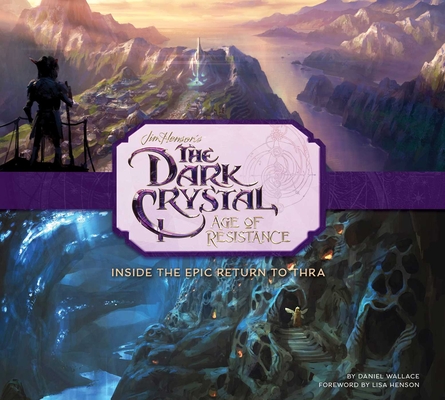 Age of Resistance: Inside the Epic Return to Thra

Explore the creation of The Dark Crystal: Age of Resistance, Netflix’s highly-anticipated new prequel series from The Jim Henson Company, with this all-access look at the show’s journey to the screen.

Delving into the incredible creative process behind the series, this deluxe volume reveals how Jim Henson’s Creature Shop, legendary character and costume designer Brian Froud, and director Louis Leterrier brought Thra and its characters to life alongside the artists and puppeteers who are continuing the legacy of the original film.

Filled with exclusive interviews with the creative forces behind the show, plus concept art, set photography, puppet designs, and more, this is the definitive exploration of The Jim Henson Company’s epic return to Thra.

Praise For The Dark Crystal: Age of Resistance: Inside the Epic Return to Thra…

“A perfect companion to the ongoing phenomenon”

“It’s a perfect tome to tackle after watching the series (again) and the behind-the-scenes documentary (again) because you can really get a sense of the craftsmanship on display here...If it’s lore you want, this book has a ton of it.”
— Collider

“Inside the Epic Return to Thra is as epic as the title implies. This almost 200-page behemoth is full of as much wonder as the show itself”
— The Geekiary

"In simply picking up the book it, feels almost like one is picking up a sacred tome. When it comes time to open the book, expectations will be exceeded. Between the art, the quality of page and pictures, as well as the lore inside, Return to Thra delivers on every level."
— That Hashtag Show

"Between the information contained inside, the great looking artwork, and well planned layout, it manages to be far more than a coffee table book, and something you’ll be eager to come back to."
— Cinelinx

“A Must-Have For Dark Crystal Fans”

“This gorgeous oversize book details the creative process that brought Thra and its characters back to life and continued the legacy of Henson’s original film and vision. Seriously, this book will send any fan of The Dark Crystal over the moon.”

Daniel Wallace is the author or coauthor of more than fifty books, including The Jedi Path, Ghostbusters: The Ultimate Visual History, The World According to Spider-Man, Warcraft: Behind the Dark Portal, and The New York Times best-selling Star Wars: The New Essential Guide to Characters. His specialty is exploring the underpinnings of popular fictional universes.

Lisa Henson is the executive producer of The Dark Crystal: Age of Resistance. She is also the CEO of The Jim Henson Company, where she oversees all of the company’s television and feature film production.
Loading...
or support indie stores by buying on