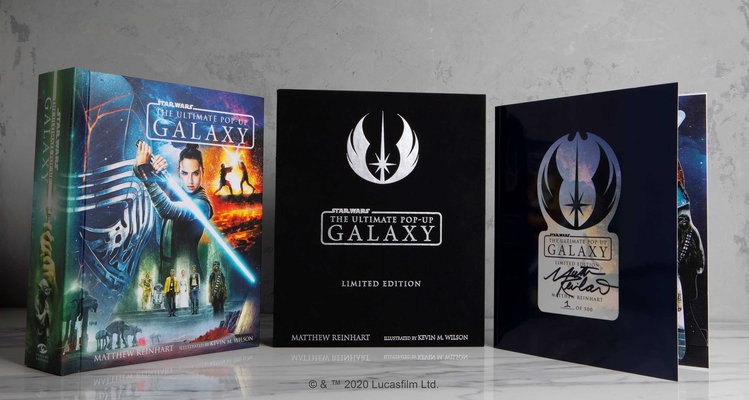 Jump into hyperspace for a thrilling pop-up journey through the entire Star Wars saga with this limited edition book from pop-up legend Matthew Reinhart’s new masterpiece.

From the war-torn battlefields of the Clone Wars to the rebels’ last stand over the Death Star and the Resistance’s climactic clash with the First Order on Crait, this one-of-a-kind limited edition pop-up book takes fans on a unique interactive adventure that brings the Star Wars saga to life in a whole new way.

Featuring the most iconic moments from the entire saga rendered as ingenious pop-up creations, Star Wars: The Ultimate Pop-Up Galaxy allows fans to interact with the action, launching rebel snowspeeders against AT-AT walkers, helping the Millennium Falcon escape First Order pursuers on Jakku, and more. Presented in a dynamic 360-degree format that enables the action to be viewed from all sides, the book also opens up to form a displayable 3D diorama of the entire saga. This exclusive limited edition also includes an incredible removable pop-up poster signed by world-renowned paper engineer Matthew Reinhart.

Packed with amazing Star Wars moments and hidden surprises to discover, Star Wars: The Ultimate Pop-Up Galaxy Limited Edition represents a whole new level of sophistication and interactivity in pop-up books and is guaranteed to thrill fans of all ages.

Matthew Reinhart studied industrial design at the Pratt Institute in Brooklyn, New York, before finding his calling as a paper engineer. His books include the best-selling Star Wars: A Pop-Up Guide to the Galaxy, Game of Thrones: A Pop-Up Guide to Westeros, and DC Super Heroes: The Ultimate Pop-Up Book, among many other award-winning titles. He lives in San Francisco.

Kevin Wilson has exhibited his work globally and worked with clients such as IMAX, Marvel, and Bad Robot. He lives with his wife and two daughters in the south of England.
Loading...
or support indie stores by buying on