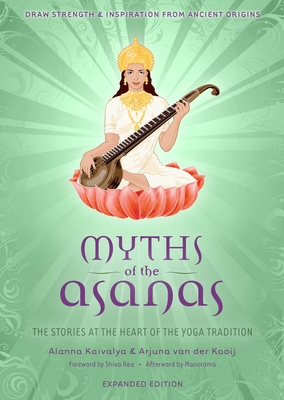 Myths of the Asanas (Paperback)

The Stories at the Heart of the Yoga Tradition

Enhance your yoga practice with this all-new expanded edition of the ultimate guide to the stories behind the most beloved poses of all time.

Many yoga practitioners explore the benefits of yoga through its poses, but did you know that the magic and mystery of yoga lie within the power of yogic mythology? Myths of the Asanas was the first book to collect and retell the ancient tales of yogic myth to a modern audience, and has since become a beloved resource for yoga practitioners and instructors the world over. This expanded edition contains nine unheard stories about some of the yoga world's most beloved poses.

The myths behind yoga’s spiritual tradition have the power to help students of all levels realize their full potential. Understanding the subtle whimsy and power of the child while in child’s pose gives us permission to recall forgotten dreams and find the power to manifest them now. Learning of the disabilities of the great sage Astavakra while attempting his arm-balance pose encourages us to understand how powerful we are when we recognize the strength that lies beyond any perceived limitations. Marveling at the monkey-god Hanuman’s devotion to his best friend, Ram, keeps us in alignment with our integrity during the hanumanasana splits pose as we dig deeply to discover the source of spiritual strength within ourselves.

Alanna Kaivalya, also known as "The JivaDiva," produces the JivaDiva Yoga Jam podcast, which has been heard by over a million people worldwide. In March 2008, Yoga Journal named Alanna one of the top twenty teachers under forty. She is a contributing writer to Yoga Journal, she regularly teaches at Yoga Journal conferences. She lives in New York City.

Arjuna van der Kooij holds an MA in cultural anthropology from the University of Amsterdam. Son of a pastor and student of the late B. P. Puri, he is a practitioner of Bhakti yoga. He divides his time between India and Amsterdam.
or support indie stores by buying on
(This book is on backorder)
Copyright © 2020 American Booksellers Association