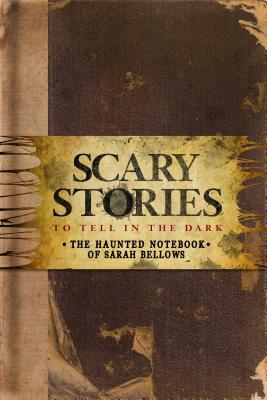 Scary Stories to Tell in the Dark

The Haunted Notebook of Sarah Bellows

The haunted notebook of Sarah Bellows is now in your possession. It contains scary stories featured in the upcoming Scary Stories to Tell in the Dark film and includes behind-the-scenes details that reveal how the thriller was brought to life on-screen.

It’s 1968 in America. Change is blowing in the wind . . . but seemingly far removed from the unrest in the cities is the small town of Mill Valley, where for generations the shadow of the Bellows family has loomed large. It is in their mansion on the edge of town that Sarah, a young girl with secrets, turned her life into a series of scary stories — stories that have a way of becoming all too real for a group of teenagers who discover Sarah’s terrifying prose.

Scary Stories to Tell in the Dark: The Haunted Notebook of Sarah Bellows is a must-have companion to the upcoming film. Inside are Sarah Bellows’ scary stories, illustrated with dozens of frightening and intricate sketches and color artwork. Designed as a replica of the book seen in the film, these pages also include a behind-the-scenes section, filled with concept art and unit photography, showing how director André Øvredal and producer Guillermo del Toro brought Scary Stories to Tell in the Dark to the screen.

Praise For Scary Stories to Tell in the Dark: The Haunted Notebook of Sarah Bellows…

“Pages and chapters move perfectly from one story into the next, designed to infuse a nightmare or two into your psyche. It’s designed to be creepy but fun, the kind that gives you shivers! So make sure and add this cool release to your film book shelf.”
— HorrorNews.net

“To call Insight Editions’ Scary Stories To Tell In The Dark: The Haunted Notebook a “companion book” is to sell it short. It oozes with it’s own sense of terror and fright that allow it to rise, menacingly, on its own.”
— That Hashtag Show

"Author Richard Ashley Hamilton lovingly presents the book as both a behind the scenes look at the movie and a piece of the movie itself. Insight Editions famous attention to detail pays off and makes a wonderful companion to fans of Scary Stories To Tell In The Dark, the movie and the books. It is the perfect companion to the movie and will delight both readers and watchers alike!"
— Kyle McMahon (Pop Culture Weekly Podcast)

In his heart, Richard Ashley Hamilton remains a lifelong comic book fan and has written, edited, developed, and published numerous graphic novels and monthly titles, including DreamWorks Trollhunters (with Marc Guggenheim) for Dark Horse Comics, The Reign of Megamind for DC Comics and, yes, it’s true, Return of the Super Pimps and Miserable Dastards for Dial "C" for Comics. Richard lives in Silver Lake, California, with his wife and their two sons. Richard Hamilton writes the ongoing DreamWorks Press: Dragons and Dinotrux digital storybook apps and has written for television on the Netflix series Dragons: Race to the Edge.
Loading...
or support indie stores by buying on