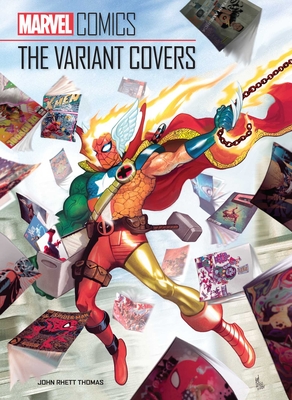 For the first time ever, explore the amazing visual history of Marvel Comics variant covers in this definitive collection.

Comprising some of the most sought-after and valuable comic art in the world, variant covers are a time-honored tradition in comics publishing. The variant cover phenomenon began in 1986 and was immediately embraced by fans everywhere; it was then bolstered in 1991 by Marvel Comics’ X-Men #1 setting the world record for the best-selling comic of all time, which is attributed to the astonishing collection of five variant covers released for the issue. The notion of variant covers caught on and has now become a regular part of Marvel Comics’ diverse output, with a spectacularly creative set of alternate covers being created for many key issues.

John Rhett Thomas is a marvel comics expert who has written more than fifteen Marvel art books over the last decade. His works include The Marvel Art of Joe Quesada, The Marvel Art of Marko Djurdjevic, The Marvel Art of John Romita Jr., The Art of Spider-Man Classic, and several Marvel Monograph titles.
or
Pre-Order Now
Copyright © 2020 American Booksellers Association