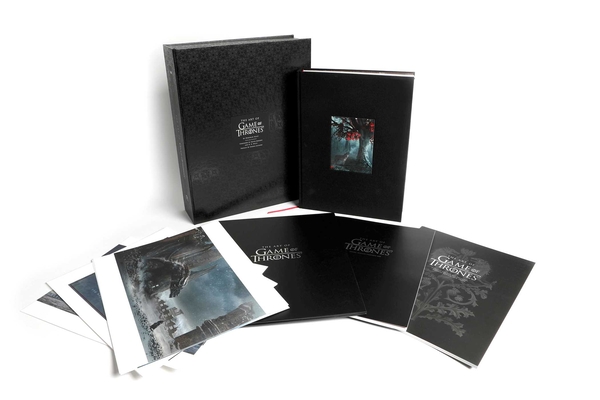 Art of Game of Thrones (Hardcover)

Filled with gorgeous illustrations and artwork from HBO’s hit series, the Limited Edition of The Art of Game of Thrones is the definitive Game of Thrones art collection.

Fans will recognize thrilling moments and stunning locations from the show. This striking limited edition of The Art of Game of Thrones contains eight beautiful art prints and two exclusive booklets highlighting the graphic design work and visual effects design that brought this beloved show to life. Each set is also signed by production designer Deborah Riley. Showcasing a multitude of fascinating and beautifully rendered images and previously unpublished works of art, this collectible book contains the visual legacy of Game of Thrones and is a must-have for fans of the show.

Since its first season, Game of Thrones has been one of the most popular and successful television shows ever created. Beautifully crafted and presented in a deluxe, large format, these pages present a visual chronicle of the meticulous work done by artists to bring the world of Westeros to life on-screen.

Deborah Riley started her design study as an architecture student at Australia's University of Queensland and went on to complete a stage design degree at the National Institute of Dramatic Art. In 2013 she was hired as the production designer for the fourth season of HBO's Game of Thrones. Since then she has earned four consecutive Emmy Awards, three Art Directors Guild Awards, and a BAFTA for her work on the show.