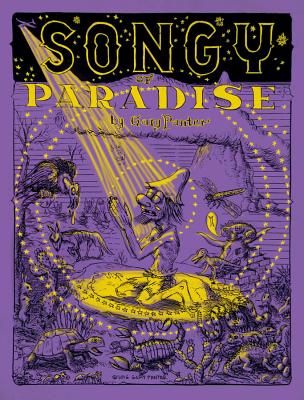 Panter’s version doesn’t rely on Milton’s words, but faithfully follows the structure of Milton’s Paradise Regained, with one notable exception: Jesus has been replaced by a hillbilly, Songy, who is on a vision quest before being tempted by a chimeric Satan figure.


Praise For Songy Of Paradise…

Songy, besides giving Milton a jab in the ribs, can be read as a guide to some of the forces and obsessions that have shaped Mr. Panter’s art, including: dinosaurs, religion, psychedelia, rural Texas and comics themselves.

Gary Panter, a prolific cartoonist who emerged in the eighties as the leading proponent of punk comics, has long been interested in blending mystical fantasy and literature to create wryly irreverent comics.
— The New Yorker

In just a few dozen pages, punk-comics pioneer Gary Panter offers up one of the most visually gripping and emotionally soaring pieces of his career. ... Songy serves as a primer for newbies and a treat for connoisseurs of his idiosyncratic takes on the classics of the Western canon.

Songy in Paradise is as serious as it is goofball, as awesome (in the original meaning) as it is entertaining, as much of a tribute to Milton’s vision as it is a testament to Panter’s own.

Gary Panter has lived in Brooklyn since 1985. A multimedia/fine artist, his pioneering, post-underground comix work helped define the alternative comics movement in venues such as Raw, and his aesthetic remains influential. He is a Cullman Study Center fellow and a recipient of a Daimler/Chrysler design award and a Pollock/Krasner Foundation grant. He also has three Emmys for his design work on the classic PeeWee’s Playhouse television series.
Loading...
or support indie stores by buying on