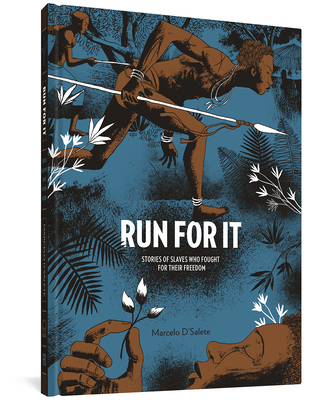 Run For It (Hardcover)

Stories Of Slaves Who Fought For Their Freedom

This graphic novel tells unforgettable stories about Afro-Brazilian slaves who rebelled against oppression.

Run For It — a stunning graphic novel by internationally acclaimed illustrator Marcelo d’Salete — is one of the first literary and artistic efforts to face up to Brazil’s hidden history of slavery. Originally published in Brazil — where it was nominated for three of the country’s most prestigious comics awards — Run For It has received rave reviews worldwide, including, in the U.S., The Huffington Post. These intense tales offer a tragic and gripping portrait of one of history’s darkest corners. It’s hard to look away.

Brazilian cartoonist Marcelo D’Salete is a graduate of the University of Sao Paulo with a degree in fine arts. He is an acclaimed illustrator, teacher, and historical author who lives in Italy.

Praise For Run For It: Stories Of Slaves Who Fought For Their Freedom…

D’Salete uses his compelling images to move readers and to inform them. Overall, the book is an incredibly accomplished work of cartooning.

D’Salete’s bold and graphic journey reveals that even if artistic expression can’t change the past, it can certainly convey it in a new, more accurate and generative light.

These gruesome tales offer a tragic but illuminating portrait of Brazil’s black origin. It’s hard to look away.

This graphic novel is a beautiful, brutal, and profound work of art that ensures that the legacy of brave men and women who refused to relinquish their humanity will not disappear.

Words are minimal, and the images live in a stark white world slowly being encroached upon by smudges of shadow. The image-intensive approach forces readers to slow down and take in the complex visual experience, which taps more deeply into emotion and renders the tales all the more accessible.

These brutal and tragic tales, reported through the eyes of the victims, lend context to the ongoing fight for individual liberties worldwide.
or
Buy Here
Copyright © 2020 American Booksellers Association