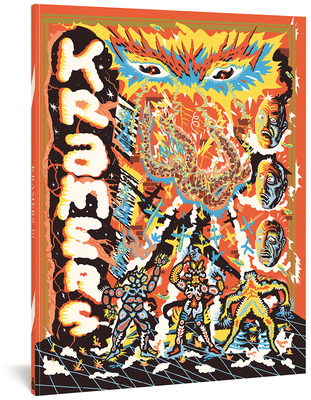 The latest installment of the most significant comics anthology of the 21st century includes comics by R. Crumb, as well as many other masters of the form.

This groundbreaking comics anthology has defined a generation of
comics artists.

Kramers 10 is a vast, impressive volume.


Sammy Harkham’s now legendary anthology returns. A new Kramers is always a landmark event in comics publishing and this edition will doubtless be no exception. Look out for that unmissable cover by Lale Westvind!

Sammy Harkham is an American cartoonist and editor, born in Los Angeles in 1980. He began making his own comics and created the zine Kramers Ergot, which has become one of the most influential comics anthologies published today.

Dash Shaw lives in Richmond, VA. He was a 2010 Sundance Labs fellow and a 2014–2015 Cullman Center fellow at the New York Public Library. A cartoonist, animator, and illustrator, he was born in Los Angeles and attended the School of Visual Arts.

Kim Deitch lives in New York, NY, with his wife, the artist Pamela Butler. His books include The Boulevard of Broken Dreams, Shadowland, Alias the Cat, and The Search for Smilin' Ed!
Loading...
or support indie stores by buying on
(This book is on backorder)