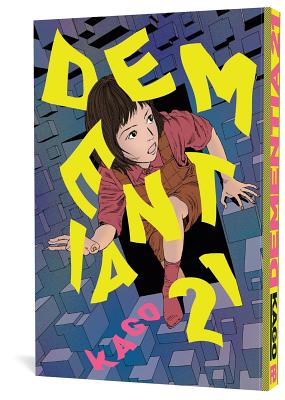 A disturbingly funny manga about a plucky home aide tasked with caring for a series of bizarre patients, from one of Japan’s most twisted and experimental cartoonists.

Yukie Sakai is a sprightly young home health aide eager to help her elderly clients.  But what seems like a straightforward job quickly turns into a series of increasingly surreal and bizarre adventures that put Yukie’s wits to the test! Cartoonist Kago, who is well known for combining a more traditional manga style with hyper realistic illustration technique, an experimental visual storytelling approach, and outrageously sexual and scatological subject matter, has single-handedly created his own genre: “fashionable paranoia."

Showing influences from Salvador Dali to Katsuhiro Otomo, the combination of Kago’s precise, expressive, and kinetic line work with his wacky storytelling is at turns engrossing and repulsive. Mature fans of unconventional manga will appreciate the surreal spiral of body horror, tragicomedy, and dark humor.
— Publishers Weekly

Charming, hilarious, and thought-provoking. Dementia 21 proves that Kago is a cutting satirist with a deft touch for black comedy.

As much as I admire Kago's oddness as a writer, his artistic pen is even sharper. [His characters] retain a realistic edge that intensifies their horror-tinged universe.
— PopMatters

Dementia 21 is a great way to introduce the world to Kago’s brilliant work. If you’re looking for amazing manga, look no further.

Dementia 21 revels in bodily irreverence and pushes corporeality to the limits of the imagination. It is a fine introduction to the strange world of Kago.

Shintaro Kago is a manga artist who has gained a cult following for his transgressive work marked by horror, sci-fi, psychedelic erotica, and a keen sense of the grotesque. His comics include Fraction (2009), Super-Dimensional Love Gun (2019), and Dementia 21 (2020). He lives in Tokyo.
Loading...
or support indie stores by buying on
(This book is on backorder)