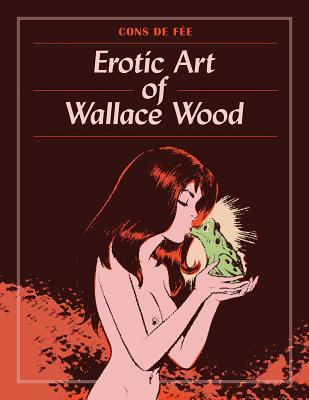 Fantagraphics has painstakingly assembled the most complete collection of Wood’s erotica.

This book collects his early gag cartoons for men’s magazines; his wicked takes on Alice in Wonderland and the Wizard of Oz; and his slyly sexy fairy tales The Frog Prince, Cinderella, Sleeping Beauty, and Hansel and Gretel — plus his raunchy version of Snow White. Wood, who garnered international fame as a premier parodist for Mad, also takes aim at comic-book and -strips icons in such stories as “Prince Violate,” “Stuporman Meets Blunder Woman,” “Flasher Gordon,” “Starzan,” and even his own character, Sally Forth. Wood’s cartoon commentaries on sex and society are included, such as “The Sexual Revolution” and “Brave Nude World.” Other rarities include “The Marquis de Sade Coloring Book,” “Dragonella,” and the complete run of all of his covers for the infamous Screw magazine.

For fans who consider the 1950s and 1960s the greatest era of comics, Wallace Wood is second only to Jack Kirby. … His fairy-tale sex parodies of the mid-1960s have affinities with his Mad work a decade earlier. The panels are filled to the brim with jokes. The punch lines come out of nowhere. The stories in Cons De Fée, that is to say, is of a piece with everything Wood did.

Wallace Allan Wood (1927–1981) is widely considered to be America’s greatest science fiction cartoonist, but he was also one of the brightest lights of the early Mad comic and, later, a pioneering alternative/underground cartoonist/publisher with his magazine witzend.
Loading...
or support indie stores by buying on