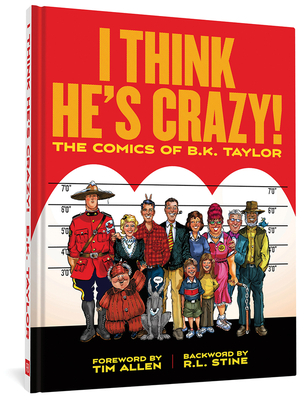 Torn from the pages of National Lampoon magazine: Fantagraphics brings you the complete collection of The Appletons, Timberland Tales, and other hilarious comics creations.

For fourteen years, cartoonist B.K. Taylor regaled and baffled readers with the good-natured goofiness of his odd suburban family, The Appletons, and his innocent cast of Canadians who encounter the outside world and the trials of everyday life in Timberland Tales. Talyor's art is richly, realistically, and subversively detailed. At first, you might think it's being played straight, but take a closer look … With a foreword by comedian and star Tim Allen (Last Man Standing) and an afterword by horror writer R.L. Stine (Goosebumps; Fear Street).


Praise For I Think He's Crazy!…

[Taylor’s comics] are hilariously and subversively written, and the artwork alone is often enough to make you laugh.
— Forces of Geek

Norm [Appleton] is the embodiment of an early sitcom dad — a Ward Cleaver or Mr. Brady —
combined with Satan.
— Tim Allen

Tim Allen is an actor and comedian known for his role as Tim Taylor on the ABC sitcom Home Improvement. In 2017, he won The People’s Choice Awards for Favorite Comedic TV Actor and has published two books.

RL Stine is a novelist and short story writer best known for his young adult horror fiction, including the Fear Street and Goosebumps series. His books have sold over 400 million copies.
Loading...
or support indie stores by buying on