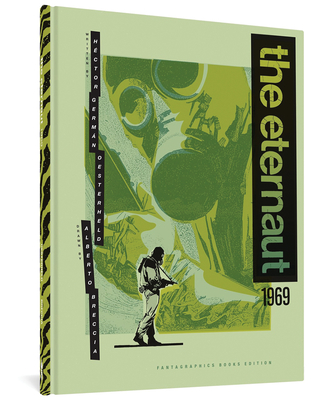 The Eternaut 1969 (The Alberto Breccia Library)

An atmospheric, apocalyptic allegory of political resistance from an Argentine comics master.

In The Eternaut 1969, a deadly “snow” falls. Juan Salvo’s small household of family and friends are spared, protected inside his home—but what horror awaits them in the silent, deserted streets of Buenos Aires? Venturing out in search of supplies, our everyday heroes soon join the resistance against an enemy far more sinister than anything they could have imagined.


Praise For The Eternaut 1969 (The Alberto Breccia Library)…

Oesterheld's tale is
an obvious allegory for resistance struggles of all kinds.
— NPR

Breccia's panels are revolutionary in their combination of precision and expressionistic energy.
— PopMatters

(On Mort Cinder): A fundamental piece of the global comics genome.

Héctor Germán Oesterheld (HGO) (born July 23, 1919; "disappeared" by the military and presumed dead 1977), was a pioneering Argentine graphic novel and comics writer. Notable works include his science-fiction series El Eternauta, as well as Life of Che, a biography of Che Guevara.

Alberto Breccia (b. 1919; Montevideo, Uruguay; d. 1993, Buenos Aires, Argentina) is an influential, internationally acclaimed comics artist and cartoonist. His career began in the 1940s, during the golden age of Argentine comics. From 1962–1964, he drew Mort Cinder, written by Héctor Germán Oesterheld, which is considered a masterpiece of the form. He took a break from comics to teach and co-found the interdisciplinary art school IDA (Instituto de directores de Arte) but returned in 1968 to draw graphic biographies of Che Guevara and Eva Perón, and a reboot of Oesterheld’s seminal 1959 graphic novel, The Eternaut. Throughout the 1970s and early 1980s — when Argentina suffered under a series of military dictatorships — and beyond, Breccia drew serialized comics for the European market, working with and adapting writers such as Poe, Lovecraft, Borges, Trillo, Sasturain, and many others. In 2021, he was inducted into the Will Eisner Hall of Fame.
Loading...
or
Not Currently Available for Direct Purchase