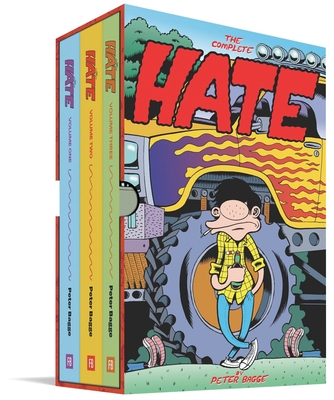 An archival collection of one of the bestselling alternative comic book series — arguably, the Great American Grunge novel — complete for the first time.

The Complete Hate is a three-volume set that includes the original 1990-1998 30-issue run, the nine subsequent Hate Annuals, and tons of other Hate-related comics, illustrations, and ephemera created for books, magazines, comics, toys, and other merchandise. Bagge combined his cartoony drawing style with uncomfortably real Gen X characters, and the comic books resonated with readers. Book One (Hate 1-15), focuses on young Buddy Bradley's travails in early 1990s Seattle. Book Two focuses on Buddy and his girlfriend Lisa Leavenworth's move back to Buddy's native New Jersey (and a switch from black-and-white to full color). Book Three features the final arc of Bagge's magnum opus, as Buddy and Lisa become parents (and buy a garbage dump). Each volume, along with the slipcase, contains new covers, endpapers, title pages, and other surprises by Bagge.


Praise For The Complete Hate…

Bagge's captivating
artwork and humor ensure that the title is relevant

"Peter Bagge returns to his indie comics roots and to Buddy Bradley, one of his most enduring characters, [with] The Complete Hate, a three-volume collection of Bagge's fictional chronicle of the gruff, politically incorrect, heading nowhere fast, New Jersey slacker."

The box set provides a fancy way to relive the highs and lows of the decade seen through Bagge’s twisted lens, and to enjoy some of the best, most iconic comic storytelling of the era.
— Rob Salkowitz - Forbes

Hate is one of the best books ever made, and this hefty-yet-approachable collection is a great way to enjoy it.

Peter Bagge  created Hate, one of the bestselling and most influential comic book series of the past quarter century. Born in New York in 1957, after graduating from the School of Visual Arts, Bagge contributed to and, along with R. Crumb, edited the underground anthology Weirdo. Bagge's numerous original graphic novels and collections of comics have won him multiple Harvey Awards, an Inkpot Award, and numerous Eisner Award nominations. He lives in Tacoma, WA.

Born in Texas, Jim Blanchard has lived all across the U.S.A. and in Norway. From 1982–1988, he was the editor and publisher of the punk rock/graphics zine Blatch. In 1987, he moved to Seattle, Washington, where he’s been an illustrator, designer, and comic book artist, as well as an art director for Fantagraphics Books. He now lives in Bellingham, Washington, with his wife Diana and his dog Lucius.
Loading...
or
Not Currently Available for Direct Purchase