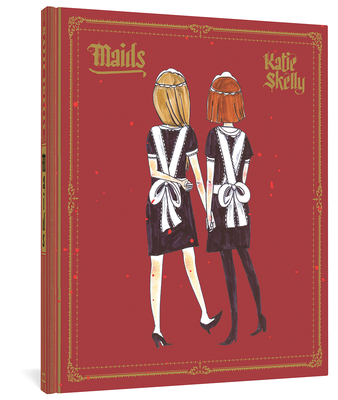 The scandalous true crime story about the Papin Sisters, as told by one of comics' most stylized talents.

Christine Papin, an overworked live-in maid, is reunited with her younger sister, Lea, who has also been hired by the wealthy Lancelin family. They make the estate's beds, scrub the floors, and spy on the domestic strife that routinely occurs within its walls. What starts as petty theft by the maids — who are flashing back to their tumultuous time in a convent — shortly turns into something more nefarious. Madame Lancelin’s increasingly unhinged abuse ignites the sisters' toxic upbringing and social class exploitation and explodes into a ghastly double murder, an event that shocked and fascinated 1930s France and beyond. Maids has high bravura and high intrigue, all drawn in Skelly’s highly stylized manner, which combines the best of pop art, manga, and Eurocomics.

Skelly's latest venture, Maids, continues to excavate her obsessions with symbiotic friendships, control that runs generations deep, and personal liberation… Maids finds Skelly at the height of her visual and storytelling powers and promises to be one of her most twisted visions yet.

This subversive horror story will satisfy readers who like their crime stories served with gender and class analysis and a pretty whipped topping.
— Publishers Weekly (starred review)

Maids draws striking power from the way Skelly fully embraces the potential of her format.

Skelly's perceptive examination of the complex bond between [the Papin sisters] evokes incredible sympathy for the two.
— Library Journal

Skelly has masterfully delivered a macabre journey we might enjoy on a cold winter’s night.
— Comics Grinder

A masterpiece for working women from a working cartoonist of the highest order.
— Solrad

Skelly’s iconic illustration creates a storybook out of this macabre tale. The effect is haunting.
— Doom Rocket

Skelly gets a lot of mileage from juxtaposition between her simple, approachable art and the undertones of emotional and economic violence in the story.
— Forbes

Katie Skelly is a Los Angeles-based cartoonist whose comics include Nurse Nurse (SparkplugBooks, 2012), Operation Margarine (AdHouse Books, 2014), My Pretty Vampire (Fantagraphics,2017), and Maids (Fantagraphics, 2020). She has written and lectured about comics for outlets such as The Comics Journal, Fantagraphics Books, Japan Society, The Center for Cartoon Studies, Fordham University, and The New School.  She also co-hosts the podcast Thick Lines with fellow cartoonist Sally Madden. Skelly holds a B.A. in Art History from Syracuse University, and was awarded the Emerging Artist Prize at Cartoon Crossroads Columbus in 2015.
Loading...
or support indie stores by buying on