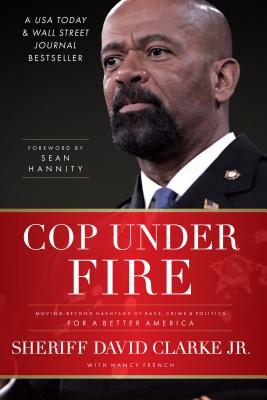 Moving Beyond Hashtags of Race, Crime and Politics for a Better America

America has become increasingly divided and polarized in recent years. With growing racial tension, animosity toward law enforcement professionals, government corruption, and disregard for the constitutional process, there seems to be no easy answer in sight. But Milwaukee County Sheriff David Clarke knows where we must begin: we must stop blaming others; look at our problems with open eyes; take ownership of our family, community, and country; and turn to God for solutions. Deeply rooted in Sheriff Clarke's personal life story, this book is not a dry recitation of what has gone wrong in America with regard to race. It's about the issues that deeply affect us today-both personally and politically-and how we can rise above our current troubles to once again be a truly great people in pursuit of liberty and justice for all.

"The principles Sheriff Clarke stands for are the same principles this nation was built on. He's much more than the Milwaukee County Sheriff. He's America's Sheriff . . . and Cop Under Fireis a must-read for people who love this great country."
-SEAN HANNITY, FOX News Channel

"Clarke is a unique voice today: fearless in his contempt for political correctness and eloquent in his articulation of core American values."
-HEATHER MACDONALD, Thomas W. Smith Fellow at the Manhattan Institute and author of The War on Cops

"Sheriff David Clarke provides a much-needed voice of reason in tackling America's challenges. He speaks his mind, and his no-nonsense approach to law and order is exactly what we need to make our country safer."
-CHRIS W. COX, Executive Director, NRA Institute for Legislative Action

"Even in a predominantly liberal community, his message of law and order, accountability, and self-empowerment resonates. He is one of America's most important cultural voices."
-MARK BELLING, Talk Radio Host for 1130 WISN-AM in Milwaukee and columnist for newspapers including the Milwaukee Post

"At a time when America seems to have lost its way, Sheriff David Clarke offers critically important leadership, both as one of the nation's top cops and as a much-needed public truth teller."
-MONICA CROWLEY, PH.D., FOX News Channel, The Washington Times

"I implore all to read Cop Under Fire . . . Sheriff Clarke is a tremendous leader, follower, and a strong voice of reason who needs to be heard by all!"
-KRIS "TANTO" PARONTO, Former U.S. Army Ranger (2nd Battalion, 75th Regiment), Security and Military Consultant, and Hero of the Benghazi Attack

Since his appointment as Milwaukee County Sheriff in March 2002, David A. Clarke Jr. has been elected to serve in that position for four consecutive terms. Clarke graduated from Concordia University Wisconsin with a degree in Criminal Justice Management. He is also a graduate of the prestigious FBI National Academy in Quantico, Virginia. Sheriff Clarke received an M.A. in Security Studies from the U.S. Naval Postgraduate School, Center for Homeland Defense and Security, in Monterey, California in September 2013. He was honored with the 2013 Sheriff of the Year Award from the Constitutional Sheriffs and Peace Officers Association, and in 2016 he was named Law Enforcement Leader of the Year by the Federal Law Enforcement Officer Association Foundation (FLEOA). A regular and frequent guest on the FOX News network, Sheriff Clarke and his wife, Julie, live in Milwaukee, WI.